The wait to see Michael Jackson, is like waiting for a bus. In my case, you wait 5 years to see him, then 3 come along in one week!!

Both presented top quality, but different shows. The former, ‘Michael Jackson – Behind the mask’ was more an interpretative performance of his music, this one was more a concert performance from Robert Alexander Giles and his live band. 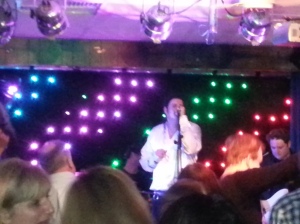 This was a foot stompingly, high energy gig and dance combined. Robert Alexander Giles sang beautifully and sounded just like Michael Jackson. The band were superb and authentic in sound too. So much so that they had no difficulty getting the packed crowd up on their feet to sing and dance. I’ve never seen the venue so busy for a show, nor witnessed so many on their feet freely dancing away. This created a lovely, party atmosphere with everyone clearly enjoying the music of the legendary Michael Jackson. Some a little bit too much as I saw one older gentleman tumble over – maybe he’s a bit out of practice at doing the moonwalk or had imbibed one too many during the evening!

Many of the big hits were played – Beat It, Billie Jean, PYT, You’re out of my life, ABC, Thriller, I Want You Back, Rock with You, Don’t Stop Till you Get Enough, Human Nature and so many more of MJ’s much loved songs.

I loved his “ooos” and “aahhhs”. Everyone joined in. If you closed your eyes you’d have thought Michael Jackson had been resurrected and was in the Club!

The only thing Robert Alexander Giles didn’t do as well as Michael Jackson was dancing. Whilst he had a go, his moves and confidence were sadly lacking and not a patch on his superb voice.

Nonetheless, that didn’t really matter as the audience were too busy enjoying themselves to be that bothered. Robert Alexander Giles doesn’t bill himself as a look-a-like, but more of a sound-a-like, and to be fair, that’s the main thing as there will only ever be one Michael Jackson.

Photographs and review © Tiemo Talk of the Town

Forthcoming shows at Tropic at Ruislip include Bruce Springsteen, Lee Ashley as Robbie Williams and Rhapsody as Queen.