Posh Reggae at The Palace from the Saxophone Queen

Posh Reggae at the Palace from the Saxophone Queen

On a chilly night in North London saxophonist YolanDa Brown warmed the heart with a wonderful, high quality night of musicianship she entitled ‘posh reggae.’ It certainly felt posh in the august setting of AlexanDra Palace.

The large audience for this, the final show of her 10th Anniversary Tour, was thoroughly entertained with a selection of songs from her last album ‘Love Politics War’ (2017) as well as numbers from ‘April Showers May Flowers‘ (2012). The music was beautiful, melodic and relaxing. YolanDa and her band were every bit as classy as the AlexanDra Palace they were performing in.

I loved her description of the music as posh reggae. Clearly a reggae fan, she regaled the audience with snippets of Bob Marley songs, jazz, more reggae and RnB tinged music. Her sax playing was stupendous, as was her supporting cast of top quality musicians.
I would have bought her ‘Love Politics War’ CD there and then I was so impressed, but alas they had no e-payment system set up, which was perhaps the only slight mis-step of the night.

She was supported by Omar who joined her for a couple of songs. His voice, as always, was superb. The singers were in equally fine voice and looked to be having a blast on stage. 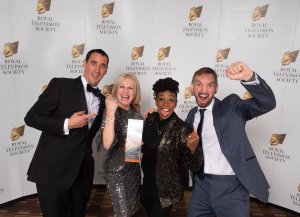 Not only that but she announced she was expecting a baby girl next month. You’d never have guessed by looking at her and observing her energetic performance. A highlight was when she went into the aisles playing the saxophone so fans could observe her playing up close and personal.

The last, but not least, of the big announcements was that YolanDa will be performing on Jool’s Holland’s annual Hootenanny show on New Year’s Eve, always one of the NYE highlights (well, for those not going out on NYE anyway!) Other guests include Pauline Black, Ruby Turner, the Stereophonics and Stormzy.

It was a great co-indicence to be at this iconic venue as just a few weeks earlier I was enjoying the skating scenes in the hit movie ‘Last Christmas‘, which were filmed at the AlexanDra Palace skating rink.

This was a tremendously enjoyable show and although the album’s entitled ‘Love Politics War’ the evening was filled with love(ly) music but was refreshingly politics and war free.