Oh what a night sang the Four Seasons back in late December 63. That song title well and truly summed up the spectacular night’s entertainment laid on to mark the 80th birthday celebration for legendary actor Rudolph Walker OBE.

It’s quite something to think that Neville Chamberlain was the Conservative British Prime Minister when Walker was born in September 1939, the year World War II started. Chamberlain resigned in 1940 when he was unable to generate support from the Labour and Liberal Democrats for his stance in the war. He was replaced by Winston Churchill and the rest is history. Literally. Brexit has echoes of this historic period all over it with our current and previous Prime Minister’s unable to secure the backing of the leading opposition parties and replacing one Tory Leader (Theresa May) with another (Boris Johnson) mid-way through an historic national crisis.

I am making the point that the state of the nation 80 years ago was in a similar dire crisis to that existing now (albeit without the life and death consequences of a World War). Anyway, digression over … although a little more on Brexit will follow.

A packed audience of over 1,000 people at the Hackney Empire certainly didn’t get side-tracked by politics as they lapped up a feast of entertainment served up by the cream of the Black British entertainment industry including top comedians Curtis Walker, Glenda Jaxson, Richard Blackwood and Slim who brought the house down with their wickedly funny sets. Curtis Walker was on especially fine form, especially when taking the mick out of his mother in the audience and her response to her husband’s death in 2012. It doesn’t sound so funny at all in Black and White but trust me it was. As she set sail on a post funeral cruise to recover and her son waived her off, she shouted out the name of the Island she was heading to. I won’t repeat it here as it’s a family friendly blog, suffice to say thought, when Curtis mentioned it, it took a moment or two to gradually sink in and then you just saw wave upon wave of laughter reverberate right around the theatre from the stalls to the circle to the upper circle right up the gallery. It was so hilarious it brought tears to my eyes. Walker had been on cheekily edgy form when referring to the no swearing rule for acts but might just have inadvertently crossed the cruise line!

That was a feature of the night which went down well with the audience. Slim slipped up once but quickly corrected himself. That was a nice mark of respect for Rudolph Walker and the occasion. That he and everyone else delivered fine performances without having to use profanity just goes to show it’s not necessary and that talented performers have the ability to avoid such language and when doing so, are thereby able to reach out to and be inclusive of a far bigger audience who might otherwise be put off attending live comedy. To curse on stage is actually to curse your audience, even if that is not the intention. There’s little distinction in the impact of a curse word whether deliberately aimed at someone or liberally used for impact in a joke or theatrical scene and I can’t imagine comedians really wish to curse their fans and paying customers but effectively that is what they are doing when swearing.

Richard Blackwood was funny in his relatively short set. However I didn’t quite see the need or expect toilet humour from him – no matter how amusing it was as part of a tangled web of a yarn. It didn’t seem appropriate for this occasion.

All four comedians showed exactly why they are hugely loved on the comedy circuit and despite the nature of some of the material it was great to see Blackwood back doing stand-up again after his recent more serious acting roles in Typical and Eastenders.

I found Blackwood’s comments about the importance of being your “authentic self” quite significant. In a world which wants you to confirm, where your “otherness” be that skin colour or accent can separate you from employment opportunities it’s heartening to see that Rudolph Walker retained his distinctive Trinidadian accent in Eastenders, when he could have been asked to tone it down or lose it altogether to get the role of Patrick Trueman. Being his authentic (literally a true man!) self allowed his acting talent, dedication and professionalism to shine through and enable him to remain a key figure in the show for 18 years since joining the cast in 2001. That’s a very long time in the soap opera world. Blackwood highlighted this amusingly when recalling a scene in the Queen Vic between June Brown (aka Dot Cotton) and Rudolph Walker (Patrick Trueman) when he was trying to quieten her by saying “Oh woman”. It’s the way he said it – not just “oh woman” as the script writer had it but “Oh wooomaan” in a terse Trinidadian accent loaded with meaning and frustration!

The Lovers Rock segment was superb with some of the Queens of Lovers Rock performing their greatest hits and getting the crowd up on their feet and joining in – including Caroll Thompson, Janet Kay, Lorna Gee and Paulette Tajah, plus one of the Kings of Lovers Rock, Victor Romero Evans. Although this wasn’t the comedy section of the night Lorna Gee clearly hadn’t read the script and turned the singing segment into a light hearted comedy moment as she bravely struggled to avoid a major wardrobe malfunction whilst singing. Early on in her first song, she had to stop the music, turn round and adjust the top half of her little black dress mid song, then start all over again! Not good as you could sense she was trying to literally reign herself in and be less mobile and expressive than she wanted to be. That’s a pity as her voice was certainly impressive when she hit those high notes.

A highlight of the night was when some of the singers sung personal renditions of Happy Birthday (whoever wrote that must be raking it in with the royalties!!) especially Opera singer Anne Fridal and Paulette Tajah. There was even some musical poetry with a topical, witty and funny Brexit poetic calypso song from Tobago Crusoe. See video below.

An unexpected surprise appeared in the form of TV and radio legend Chris Tarrant! He came on to pay tribute to Rudolph Walker … well only just as Robbie Gee amusingly did his best not to let him get hold of the microphone… the show needed to finish on time after all but Chris was fine, succinct and praiseworthy in his speech.

The acting community was unsurprisingly extremely well represented. With countless Eastenders on stage it’s a surprise we didn’t hear the ‘duff duff’s and that this wasn’t broadcast on the BBC! Diane Parish, Dona Croll, Ellen Thomas, Tameka Empson, Ricky Norwood were all on stage. It was interesting to hear that Ellen Thomas had at various points of her career played Rudolph Walker’s daughter, girlfriend and wife! Not a lot of people can say that! 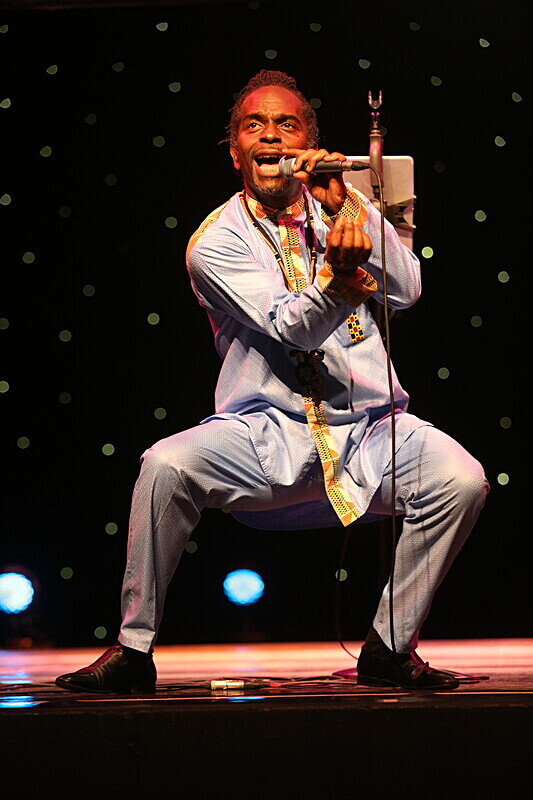 The evening showcased the wide range and depth of talent across the Black British entertainment industry. That so many came out to perform and play tribute to Rudolph Walker was a demonstration of the high regard in which he is held. Many commented on how young Walker looked and that must be a tribute to good living, diet and positive state of mind. There’s something in that that we can all learn from as getting to aged 80 is far from guaranteed. Victor Romero Evans pointed out that he always sees Walker smartly turned out, well spoken, never swearing and generally carrying himself well. Romero Evans (whose age is a mystery) is also an evergreen performer himself, who doubtless is a lot younger looking than he really is as he seems to have been around forever too.

I’m sure that many of those who graced the stage would say they owe a debt of gratitude to Rudolph Walker for breaking down barriers and opening doors for them to walk through in their respective careers. One of the main breakthrough shows for Walker was ‘Love Thy Neighbour’ (ITV 1972-76) which Walker said attracted huge TV audiences and was the ‘Eastenders’ of its day in terms of popularity and viewing figures. I don’t know if the title was meant to be a biblical reference but the term ‘Love Thy Neighbour’s appears frequently in the New Testament e.g. Matthew 19:19. “Honour thy father and thy mother: and, Thou shalt love thy neighbour as thyself.” The programme was about neighbouring couples – one Black, one White, constantly at war with the battlefield being race and lack of racial harmony between warring neighbours. The same message applies today and I think that’s one of the points the show tried to convey, that people need to love their neighbours irrespective of their racial origins and colour (people in general not just literal neighbours) and importantly, as Walker said, when it comes to our young Black youth and the terrible press they get, “It’s important to celebrate young talent when there’s a powerful media that seeks to stigmatise our young people.” 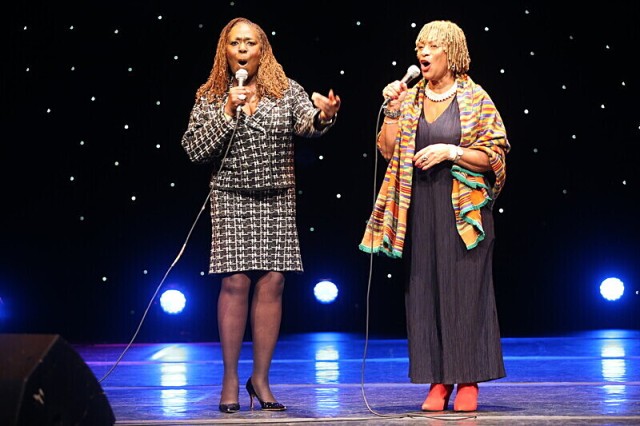 The show was not just an occasion to mark Rudolph Walker’s 80th, but equally importantly it’s aim was to raise money for the Rudolph Walker Foundation and it achieved that through raising £2,120 in a raffle. GeeStor Productions put on a super show and it was notable that they also put up a huge video screen on stage and made great use of it to display showreels of Walker’s early life, aspects of his family life, career to date and the live action from the stage. Far too often big theatres fail to think about those in the rear seats for whom the action on stage feels a million miles away and screens make the show more inclusive for all.

Oh what a night indeed. This was one of the best shows I’ve attended in many a year in terms of the wide variety and quality of acts on stage. With that, plus so many BBC stars, past and present, in attendance, this show was most definitely worthy of TV broadcast and I hope it does get shown before the year’s out.

The Rudolph Walker Foundation exists to nurture and develop the creative and technical skills and talents of young people by providing them with equipment and facilities which will enable them to produce and distribute audio visual programmes and other types of digital content relating to their culture, history, music and the world in which they live. 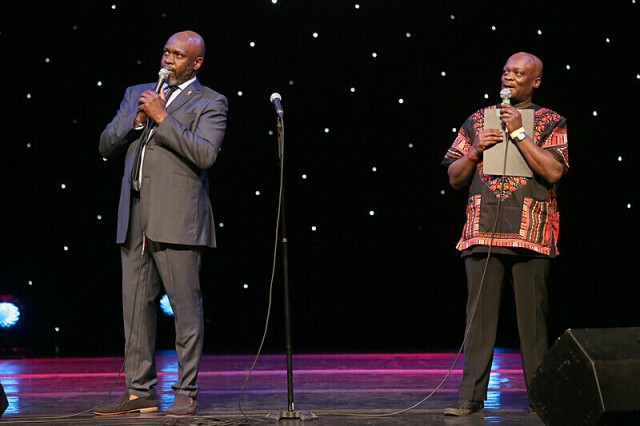 If you wish to receive regular updates as soon as new Blogs are posted or join our mailing list please complete the form below.