If Edinburgh Fringe is giving out prizes for the wittiest show title, of the 1,000’s of shows taking place in August I can’t envisage many shows will have a catchier, wittier title than Marlon Davis’s ‘Emotional Black Male.’ The title’s worth an award all by itself.

This brand new show centres around a life threatening encounter Davis had with a tree .. whilst driving at high speed three years ago. Clearly no spoiler alert required to inform you that Davis happily lived to tell the tale. Davis has turned a near fatal tragedy into a poignant and extremely funny hour long show where you discover what it’s like to have your life turned upside down and diverted onto a radically different trajectory to the one you envisaged. 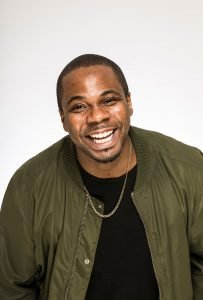 Whilst the incident obviously resulted in a terrible setback, fortunately it proved to be temporary as Davis is right back on track with an extremely funny and uplifting show which demonstrated man’s ability to triumph out of adversity.

Davis is an interesting, engaging and extremely funny comedian who effortlessly commands your attention. Along the way we hear about some of Davis’ back-story, his education, upbringing in North West London and how he straddled the line between trying to better himself and leave the hood, yet still maintain his street credibility in the tough area in which he was raised.

The subject of class and race is woven in as he jokes about getting his degree from a prestigious College as well as the un-conscious racism from some of his white lecturers.

He was at his best when in self-deprecatory mode, taking the mick out of his squeaky, high pitched accent and parenting skills and how they are perceived by his children.

Davis has emerged into the light from his darkest hour to produce a terrific, heart warming show. Running at around 1 ¼ hours there is room for reducing the length of the show to the obligatory Edinburgh Fringe 60 minutes, but that’s a minor quibble and a positive as it shows that he didn’t outstay his welcome on stage.

His show is running in Edinburgh throughout August. I’d highly recommend it and it’s such a good show that I’d be very surprised if anyone had to emotionally blackmail you to go and see it.

You can book online for either show via the above links.