It’s been many a year since I last spent a Friday night in a library, but tonight I made an exception. I wasn’t at The Library in Willesden Green to study or look for books though, but to be entertained. That said the audience and I got more than just laughter on this night of edutainment that mixed entertainment with education.

A bumper line up of comedians were compered by Mr Cee, who coolly and superbly warmed up the room to create just the right atmosphere for the acts to perform in. He had to work hard too, not because it was a tough audience, but a couple of forthright women seemed to forget this was a comedy night and came out with all sorts of challenging and aggressively out of place heckles. They probably thought they were being funny but they would have been better of leaving that to the Comedians on stage. In less experienced hands their interventions could have killed the atmosphere, but fortunately Mr Cee was sufficiently skilled to deflect these unexpected verbal attacks and win over these difficult hecklers, who were in any event, soon won over by the first act and the others that graced the stage. 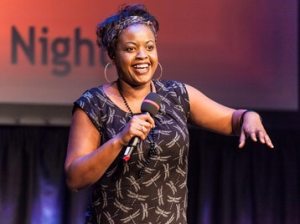 First on was Birmingham’s madcap Annette Fagon who was in rip roaring, ‘off her head’ form delighting the audience with her familiar song about Handsworth, battles to stay sane and deal with the effects of getting older on her body. She was hilarious in doing so and the audience loved her. There were a few fellow Brummies in the audience, which made her feel at home and resulted in some jovial Brummie banter.

British-Nigerian Funmbi Omatayo was entertaining and totally won over the audience with stories of how much he wished he was Jamaican as a young boy growing up in London, yet grew to be proud of his Nigerian heritage. That said, he came to realise and enjoy the benefits of being born British and playfully extracted the humour to be found in dual identity. 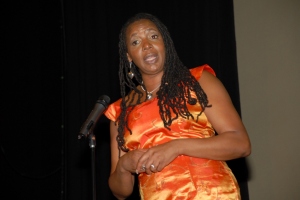 Felicity Ethnic closed a marathon first half lasting nearly 2 hours!! Aside from the host she was the first to really link her set with the Windrush comedy theme of the night, citing her frustration with what she sees around her South London neighbourhood and witnessed first hand during her former life as a Pupil Referral Officer, where she came across far too many Black men caught up in the system. That anger and passion came out in a hard hitting set that mixed the political with jokes about parenting and how back in the day the dominant and normal culture revolved around the African proverb: “it takes a village to raise a child,” i.e. as adults we take responsibility for all ‘our youth’ whether we knew them or not, are related or not and would freely discipline or talk to them if they were “acting out”. That’s to a large extent gone now and for Felicity partly explains why there are so many problems with these young men. Funmbi picked up on this theme, saying that in Nigeria that village, community ethos still exists to this very day.

For a comedy show there was a bit too much straight politics and anger in her set. Nothing wrong with that per se, but it could have been more effective it was wrapped up as comedic political satire. Her heart was in the right place though as she put men centre stage in vocalising her passion for raising good young men.

Newcomer Kaz was given 5 minutes stage time to perform on his very first professional show. The youngster wowed the audience with a barnstorming set full of original, topical and personal material, with great punch lines. I loved the brilliant joke referencing the current crime wave in London with the more mundane, yet very real annoyance Londoner’s get with drivers who take the parking spots right outside their houses. This was an amazing set from someone who only started on the open mic circuit in February this year. Look out for Kaz. He is a funny young man with a very bright future ahead of him.

Headliner Kwaku was in typical firebrand, political, take no prisoners mode. Like Felicity and others on the line up, he was livid about the recent Windrush scandal and linked this to the fact its 70 years this month since the SS Empire Windrush arrived in Tilbury Docks. For that generation to be treated so badly he considered it utterly disgraceful.

He took to the stage very late in proceedings – after 11pm and for me, whilst strong on politics, anger and education, it’s focus should have been more on finding the comedy in the situation and getting across his message in a comedic way which is what one would have expected. There were good jokes and audience interaction in his set, but it was perhaps a bit too heavy at the end of a marathon night of comedy that didn’t finish till around 11.35p.m. Each act, bar one, did around 30 minutes each and this made for far too long a night considering there were just 6 acts on the bill. Less is more as they say.

Mr Cee seemed genuinely shocked that someone had come up from Birmingham specifically for the show. He shouldn’t be. This was an excellent line up and worth travelling down from the Midlands for. Come Mek We Larf delivered more than larfs. You could call it edutainment, as not only did the education come from Felicity Ethnic and Kwaku, but from members of the audience. We learned about the Jamaican term ‘Public Defender’ and some more about Windrush from a 72 year old White, English lady in the audience who told a fascinating personal story re her parentage and her link to the SS Empire Windrush. She caused a little controversy too by suggesting that few Black people go to the Cotswolds (she’s probably right!) but should do so. She said it’s just 1.5 hours from London and has a Windrush link thanks to the Windrush River there. Tower Hill in London also has a Windrush link and she encouraged people to pay it a visit.

I enjoyed this more serious side to proceedings and it elevated the night to being more than just a stand up comedy show and was a fitting comedic tribute to Windrush.