2008 was the year President Obama won the USA presidential election. January 2008 was also the last time Chris Rock toured the UK.  A lot’s changed since then, not just in a global sense of course, but in Chris Rock’s personal life too, much of  which he freely shared and joked about on stage as he reflected on his life then and now. The Obama’s gets a mention too so maybe the long gap between tours is not such a co-incidence after all.

Politically speaking from an American perspective, 2008 was the final full year of President George W Bush’s presidency. We’re now a year into President Trump’s tenure. Sandwiched between these deeply unpopular and widely ridiculed leaders of the free world, we had the hugely popular and influential President Barack Obama who, whatever your views on his politics, in the main restored the good name and standing of the office of President of the United States of America.  Chris Rock didn’t dwell too much on Trump, other than to acknowledge the embarrassment he is widely perceived to be, whilst observing during his time in the UK that we too have our own problems with political leadership plus Brexit to focus on. 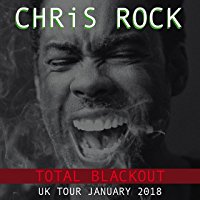 In his time away from the stand-up stage, he has been busy making numerous films and famously hosting the Oscars in 2016, when the diversity scandal was swirling around Hollywood. Now he’s gone back to what made his name in the first place and created the opportunities to branch out into movies.

Total Blackout is the name of this tour, not what happened inside the o2 Arena, although the name might be a reference to the no mobile phone policy Chris Rock insisted on. This meant that all mobile phones were literally totally blacked out and unusable in the pretty little green pouches phone users were given. I daresay if Dynamo Magician were present he would have found a way to remove his phone, but as most of us don’t possess his magical powers, all attendees had to accept that their phones were out of reach until the show was over. Whilst many may have been uncertain about being without their phones for a few hours it actually made for a more enjoyable experience all round as, just as in the old days, you just had to focus on the show or having conversations during intervals rather than being distracted by phones.  Living in the moment. You don’t actually find yourself missing it. That may have been in no small part due to the fine quality of the show, which easily held the attention from the moment Chris Rock entered the stage to the moment he took his final bow. There was never a lull or dull moment in his set that even made you think about checking your phone.

Total Blackout could also be a nod to ‘rogue US police officers’ unspoken policy of wiping out young African-American’s. Chris Rock took aim, verbally only, at the US cops, by using a vivid analogy linking his desire for equality via a cunning and not so subtle plan to level out the killing fields of America. He anticipated that this would result in a reduction of the injustice of what’s been happening in the States with increasing regularity over the past decade.  Decades in fact. His “black humoured” solution whilst obviously not serious, made his point with great wit and humour. He turned the madness on its head to try to make sense out of nonsense.

He had a lot to say about ‘white privilege’ in the show. For instance, whilst acknowledging that he is very famous, he recognises that his fame is not quite at Michael Jackson levels of recognition and therefore at the end of the day, strip away the celebrity – which only works if you are recognised (and respected), he’s still a Black man, with all the negative connotations of that, as perceived by too many racist police officers. Nonetheless, he cheerfully admitted and joked that his level of fame can get him get him out of what would, for other Black men, be somewhat sticky situations.

I hope there weren’t any teachers in the house, as Mr Rock might have found himself in detention for something of a first … praising school bullies!He ran with this highly original and brilliant train of thought, making a well argued point that many who are bullied at school go on to do amazingly well in life! He cited quite a few high profile names to back up his point. The Face book joke stood out as a shining gem on a night of many diamond encrusted jokes.

Arguably the best section, the centre piece of the show, focused on his marriage break up and lessons learned from it. It was highly personal, extremely funny, yet serious and on point.  I liked the humbling nature of it as he admitted to his own personal failings that brought down his marriage. It was admirable as he blamed nobody but himself and laid himself bare, so to speak, as he proceeded to expand upon his Top 5 keys to a successful marriage. Without giving too much away he made use of a rock band analogy. Essentially explaining that within a marriage, both partners have to be prepared to play any role, from lead guitarist to the person who plays the tambourine. These roles can be reversed at any time, but above all, the whole is greater than the sum of the parts . Judging by the knowing laughter filling the huge venue it was clear that struck just the right note for many in the packed o2 Arena.

There were even some tips for President Barack Obama too! I loved the fact he was using his show to not only deliver wave after wave of feel good laughter, but also to impart a valuable and personal message from the school of hard knocks.

Comfort is The Poison

The backdrop to the set was a huge sign entitled ‘Comfort is the Poison’. This was the message underpinning the show. To find solutions to the problems of racial discrimination, killings of innocent African-American men, knife crime in England, relationship break ups, marital problems, whatever it is you want to change in your life, people have to get uncomfortable, come up with uncomfortable solutions to their problems, be they personal, political, global or criminal. To remain in your comfort zone is to allow the poison seep in, rather than holding it back by pro-actively creating the change you want to see. He didn’t explicitly refer to it  in the show but it was implicit throughout.

I think AEG should give consideration to renaming the wonderful 02 Arena … the Q2 Arena as you spend so much time queuing to get in there. Not only that, you queue to collect your tickets, queue to get refreshments and then queue to get the train home afterwards! How about it 02 Arena? The added bonus is it wouldn’t even take much effort or imagination to change the logo! Think about it.

I’ve said this before and it bears repeating again, for what’s billed as the world’s #1 concert venue the 02 Arena really should do a lot better with their use of video screens. Rather than full length images of Chris Rock and the support acts it would have been far better if the screens showed mainly close ups so those furthest away from the stage could clearly make out the performers.

Plus to enhance the experience, the venue should have a lot more screens dotted about the arena that all present can easily view rather than only having the 2-3 screens at the side of the stage.

From video screen to the television screen, Tiemo Talk of the Town can exclusively reveal that this show will be available to watch on Netflix on Valentine’s Day.

It was great that Chris Rock undertook a full UK wide tour taking in many of our big cities, rather than just play London as so many overseas Comedians and bands do.  Moreover, as England is considered the comedy capital of the world it would be great to see more USA stars doing such full tours in the future rather than just a handful of shows.

After 10 years away from these shores this was a triumphant return to the UK for Chris Rock thanks to this brilliant show full of intelligent, serious, joyous, frivolous and uplifting humour.

I don’t know much about Chris Rock’s singing voice, guitar or tambourine playing abilities, but one thing’s for sure, give the man a microphone and he sure knows how to deliver a great stand-up comedy show. Many who saw him on this tour will be hoping he doesn’t wait another decade before returning to perform in the UK.

Thank you for reading our review. We hope you enjoyed it and that if you did, will post a comment and/or share it with others who enjoy stand up comedy and may also appreciate the chance to read it and comment. Simply scroll right down to the very end of the page and you’ll find the ‘Comments’ section.

If you wish to receive regular updates as soon as new Blogs are posted or join our mailing list please complete the form below.

This entry was posted in Comedy Reviews 2018 and tagged chris rock, comfort is the poison, tambourine man, total blackout tour. Bookmark the permalink.