There’s a saying in stand up comedy and boxing that timing is everything. It was brilliantly co-incidental timing therefore that less than 24 hours earlier the country  had started rejoicing in a potential future Watford legend, Anthony Joshua, following his stunning heavyweight title victory against Wladimir Klitschko. The day after, 30th April 2017, music fans gathered in Bushey, Hertfordshire to celebrate the life of a bona fide Watford legend, the late pop mega-star George Michael.

Bushey was the Hertfordshire town where George grew up and a public memorial service organised by the George Michael Appreciation Society and St James’s was held at St James the Apostle, Bushey, allowing locals and fans from all over the world to finally pay their respects to the pop legend, four months after his death. Such was his wide appeal, in addition to many locals, fans came from as far afield as Brighton, Kent, Madrid, Malta, Scotland, Switzerland and Wales.

In a moving service led by Father Graham Adamson and Father Neil Kelley, his artistry, musical and philanthropic legacy were fondly remembered. Father Kelley’s humorous and reflective sermon captured the spirit and generosity, as well as foibles of George. Quoting from a famous George Michael song, he said, “You’ve gotta have faith” regardless of whether that’s faith in God, we all have to have faith in some one, something or in humanity.”

An occasion like this, at a packed church on a Sunday afternoon, was a time for reflection, to ask ourselves what our legacy will be. He touched on the fact that “we’ll never know how many lives George Michael has impacted.” This was a nod to the widely reported acts of private philanthropy that came to light after his death, not to mention the huge impact his music and life had on fans world-wide.

The Price of Fame

Fr Kelley observed and asked the congregation to consider that, “with all artists, all creative types, the more they give of themselves to others, the less they give to themselves. Our lives are enriched at a cost to the person giving.”

When interviewed by BBC Three Counties Radio on Boxing Day 2016, one day after George passed away, he refused to get drawn into one particular line of questioning that “George didn’t lead a particularly Christian life,” responding that, “we’re all infallible. All of us are sinners. Which of us would like the intricacies of our personal lives splashed all over the papers?”

‘Cause I gotta have faith

The question of George and his faith is an interesting one. Speaking to fans at the reception held afterwards it was mentioned that he was raised as a Greek Orthodox Christian. His funeral on 29 March 2017 was officiated by the Greek Orthodox Priest Costas Garibaldinos. He was a church goer. I don’t know how frequently, but a source informed Tiemo Talk of the Town that, from time to time, he did attend the St Thomas of Canterbury Church, close to his Goring home. He would sit at the back and leave before the end of the service to avoid any distracting fuss or fanfare over his presence.

There are many that might have deduced from what they knew of him that he was a non-believer, but that doesn’t strike me as consistent with the fact that, in another act of secret philanthropy, he contributed to the renovation of St Thomas of Canterbury Church.

A number of his hits referred to matters of faith. Faith for instance, of course, being an obvious one, though not about faith in the spiritual sense. Three of his faith related songs were beautifully sung during the service by David Jansen, the WHAMTASTIC! tribute act singer. These were ‘Jesus to a Child’, ‘Praying for Time’ and ‘Cowboys and Angels’.

Interestingly his Highgate home is right opposite St Michael’s Roman Catholic church; the Bushey Conservative club where WHAM! played their first gig is next to St James the Apostle Anglican church and the Three Crowns Pub where a reception was held following the service is right opposite St Peter’s Catholic church. The pub was the regular of George and Andrew Ridgley when they were teenagers and is the very place where they formed the group WHAM! back in 1981.

I don’t recall him speaking much about the faith he might have had, but perhaps there was a tension going on between that, his beliefs and the life he experienced which found creative expression in his music and lyrics. One can only speculate that the choice of homes was possibly deliberately, spiritually or sub-consciously a symbol of his search to find solace and meaning in the earthly and spiritual side of his life.

The post service reception brought together super fans to reminisce and talk about their experiences of George. One super fan, George Michael impersonator, Saf Sathi, came from Gravesend, Kent to pay respects. He certainly had the look of George Michael about him, with his sharp black suit, black t-shirt, close cropped hair style and goatee beard. He said, “I had to be here today to pay my respects.” For many this was a long awaited form of closure on the megastar’s death. Claire T, 42, from Orpington in Kent, said, “I have been in love with George Michael since first hearing his music as a young girl. I visit his Highgate home and memorial quite often. He meant everything to me and I love him so much. I had to be here to show my support.” Such dedication was amazing to hear of, if slightly concerning to say the least!

It was clear speaking to a number of these super fans that it was important for them to be here to try and get a form of closure and to meet with other like minded super fans to share experiences and memories of George. There were many locals present too who shared jokes and laughter about their younger days clubbing and socialising in the local area. Some even attended the same school and pubs, including The Three Crowns, as George and Andrew.

David Jansen said, “It was an honour to be asked to sing today by Tracey Wills whom I’ve known for years. I went to the same Bushey Mead School as George and have been singing his music for the past 22 years.”

Co-organiser and Founder of The George Michael Appreciation Society of Bushey (GMAS) Tracey Wills, 45, was inspired to do something after getting a text on the night he died informing her of the news. As a local woman from Bushey, the next day she spoke to Father Kelley, the Rector of her local St James’s Church and they agreed to collaborate to put on some fundraising events and this culminated in the idea of holding this service of thanksgiving and reception. “I was worried the church might be half-empty so was pleasantly surprised to see the church packed out. It was amazing to see people grieving and shedding tears during the service and then being upbeat and singing away at the end to the closing song, ‘Wake me up before you Go Go’ – one of WHAM!’s biggest, most upbeat hits. We hope to do a lot more this year. People have been so appreciative. The phone calls, messages and growth of the GMAS in the past few weeks since it was launched have been amazing.”

This had been a hugely impressive and clearly much valued thanksgiving service and reception to remember the life of George Michael. Hearing that finale in the austere setting of an old church was a somewhat surreal ending to the service. I could never ever have  imagined hearing and dare I admit it, singing along to ‘Wake Me Up Before You Go GO’ in a church!! A great, cheerful song no doubt about it, but not one that I imagine will be making it into the hymn books anytime soon!

As I said at the start, timing is everything. As I put the finishing touches to this article on 1st May it was announced that ‘Careless Whisper’ and ‘A Different Corner’ were voted the two most popular ever songs by Smooth FM radio listeners in a poll to find the nation’s most popular songs. All of this is further evidence of George Michael’s huge popularity and contribution to British music.

Review and photographs © Tiemo Talk of the Town

If you attended and have any comments on your experience of the day that you’d like to share; or simply have comments on the above review, please feel free to post them at the end of this Blog. Simply scroll down right to the end and leave a comment. That will be much appreciated and it will be great for people to read one another’s thoughts and feelings.

Readers can also sign up for regular Blog updates in order to review new Blogs the moment they are published.

This day I call the heavens and the earth as witnesses against you that I have set before you life and death, blessings and curses. Now choose life, so that you and your children may live and that you may love the LORD your God, listen to his voice, and hold fast to him. For the LORD is your life, and he will give you many years in the land he swore to give to your fathers, Abraham, Isaac and Jacob.”

Tributes outside his Highgate home 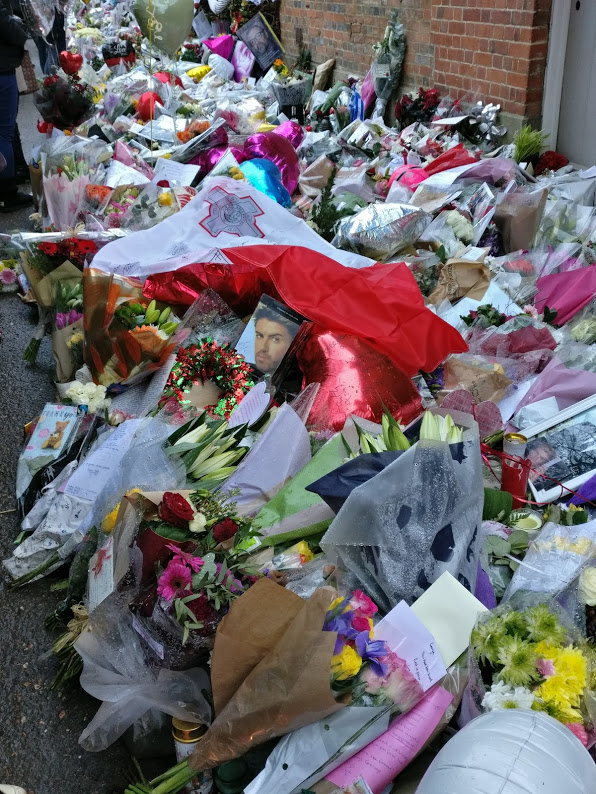 Floral tributes outside his Goring-on-Thames home