No to Donald Trump – HaLOL

A Kenyan-Indian, Pakistani, an Australian, an Eyptian, a Palestinian and a Somalian walk into a bar. Unfortunately this is not the set up for an elaborate multi-cultural joke but what really happened on Monday night when an international line up of comedians, united by being majority muslim and funny, gathered to perform for HaLOL Comedy’s Christmas Special Show at the ‘Bedroom Bar’ (sounds exciting) upstairs at the Comedy Cafe Theatre in Hackney.

The night’s comedy was superbly compered by Kenyan-Indian comedian Imran Yusuf who regaled the audience with jokes about life as an international touring comedian, being a muslim and the victim status that tends to accompany that label now – even just for “looking muslim.” Amusingly he used the recent Donald Trump scandal – where the presidential candidate recommended that “all muslim’s be banned from entering America until the US Government sorted out it’s muslim problem” – to issue a message on twitter banning Donald Trump from this show. I somehow can’t imagine Mr Trump was planning to fly over to see it anyway, but nonetheless it was a funny thing to do. A full house (minus Donald Trump) indicated the marketing ploy worked.

If he had intended coming I can report that he missed a very funny show which exposed the folly of his ill-judged comment.

I enjoyed Sajeela Kershi’s (Pakistan) set. There were some great anecdotes from her travels to Pakistan, including her forthright no nonsense response to being assaulted on public transport.

Her interactions with Iqbal in the front row were an unintended highlight of the night as his responses to her questions were unexpected and didn’t help her at all in setting up her punch lines and stories, but she made light of it and it all added to fun of the night. If anything she could have probed a little more, especially after he admitted to going to visiting Pakistan annually, yet when asked where in Pakistan he strangely said Johannesburg!!??

Omar Hamdi was terrific fun. He had the audience laughing away throughout and genuinely seemed to be enjoying the gig as much as the audience were. He reminded me a bit of a slightly camp Jack Whitehall crossed with Rhod Gilbert! He was very hyper to say the least. His heritage is pretty unique that’s for sure being half Egyptian-half Welsh.

He boasted on twitter the day after that he didn’t have to change a word of his usual routine for this muslim gig as if to indicate he was pleasantly surprised that muslim’s get his comedy too. Good, but I don’t see why he would have to anyway. I’ve not seen him before so can only presume he had some concerns that his act wouldn’t translate well.

A surprise addition to the line up on the day was that of Australian star Brendon Burns. He focused on race a lot and mocked “white privilege” in a loud, self-righteous manner. He picked on the two white people in the front row – one of a handful of white people – to back up his points. Amusing to an extent, but I wasn’t overly fond of his loud, shouty approach or constantly zoning in on the two white people to make his points. It covered up the absence of genuine jokes and felt more like he was out to make political points and show his right on credentials.

He did make good fun of the bizarreness of the Rachel Dolzeol case, the white American who said she was black, to make an amusing joke.

Bilal Zafar (Pakistan) was hilarious and got huge laughs straight away. The extended twitter gag re the made up cake shop was fantastic. The crowd warmed to him and his comedy and it was a pleasure to see another new act on this varied line up.

Palestinian-British woman raised in America (Chicago to be precise), Mona Abumishan delivered a highly entertaining set. Another surprise addition to the show, she like all the others, brought something different to this muslim feast. Her origins allowed for some original jokes re gender, Palestinian-Israeli occupation and politics generally
She was poised, confident and funny.

Headliner for the night, Somalian Prince Abdi, was on great form, creating streams of laughter right across the room. The story about meeting the drunken racist on the bus was brilliant, as was the familiar story about him on a cruiseship! He was witty, hilarious, engaging and easy to warm too. Aside from one small slip, one small step backwards for mankind and all that … which could have seen him fall through the curtains and off the stage, he didn’t put a step wrong in his closing set.

Republican presidential candidate Donald Trump may wish to ban muslims from coming to America, but if he were to ban the muslim’s performing on this show that would to deny Americans the chance to see some of the finest muslim comedian’s Britain has to offer. 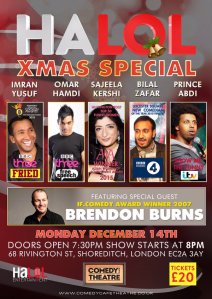 Aside from Imran and Prince Abdi all the acts were new to me and most performed very well. It seemed to be just as unusual gig for them as it was for the audience as it is a very rare occasion to have a predominantly Asian-Muslim stand up comedy show line up. There were plenty of cultural, religious and political references to underscore this, but in fact the comedy was at it’s strongest when the comedian’s simply focused on telling funny jokes and stories, regardless of whether or not they were culturally specific. Funny is funny, therefore unless it is of a nature that they know will offend Asian’s,  comedians like Omar should not worry too much about their usual material working well for a muslim audience.

In previous years Tiemo have been the organisation giving out awards so we are delighted to be nominated in two categories for the UK Bloggers Awards 2016. We are nominated in the ‘Arts & Culture’ and ‘Odeon Cinema’s Best Storyteller’ categories.

Well we need your support to turn our nominations into awards. So if you like this review and what we’ve written for you over the last year (or in fact 5 years 2011-2016) then please click the UKBA16 logo to vote for Tiemo Talk of the Town.

It  takes less than 1 minute to vote. You can vote once a day, per email address, per device, right until close of voting on Monday 25th January 2016. Your votes will mean a lot to us.

If you attended the show we’d love to read your comments. They can be simply posted via the comments section below. These may be posted anonymously if you wish.

3 Responses to No to Donald Trump – HaLOL