The Ty and Ky show is a 22 minute comedy sketch show pilot featuring cousins Tyrone-Lee Davis and Kieran Shekoni. It was the first of a strand of four brand new shows for ITV2 and its characters were influenced by a diverse range of comedies.

You have to applaud ITV for giving a chance to new talent and putting it on at a good time, 10pm on Sunday night, but unfortunately this was a truly disastrous crash and burn show.

Two things stood out immediately. Firstly, the blurb for the show described it as being full of fun packed sketches. One can only assume that the pilot left the fun pack behind on take off as it was an epic fail on that score I’m afraid. Secondly, after a social media furore forced ITV to change the name of one of its other new shows to ‘Pranksterz’ and clarify that it had no intention of offending potential viewers by its original title. They said the show sought to “undermine and highlight negative stereotypes about Black people”. However, somewhat bizarrely in this 22 minute show it did just that from start to finish. 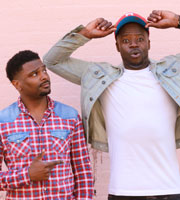 Wright is so Wrong

Congratulations to them for booking Ian Wright. The concept was a good one. However, with Wright they got it so wrong. The programme opened with what should have been a real highlight sketch starring ex-Arsenal and England football legend Ian Wright. Ty & Ky acted out the role of over protective bodyguards protecting Mr Wright as he walked through the streets of Soho in Central London. That was mildly funny, though somewhat violent, which I wasn’t mad about and nor did Mr Wright look too pleased. The “joke” was that they thought he was A.N. Other famous Black footballer, not Wrighty. Mildly amusing. It could and should have been better executed. Also this sketch should have been placed at the middle or end of the show as he was the cameo star of the programme.  Such things can be worked on in future I’m sure and as with any new show there’s always going to be room for improvement.

Even less impressive were sketches featuring Judge Boogie, which was pure idiocy. Who were the scriptwriters on this farce? Were they 8 year old’s?

Another sketch featured Dr Wrong. Well they got the name right, as Dr Wrong was so wrong featuring a gay GP asking a patient to strip inappropriately.

Then there was the job interview scene. There was a twist towards the end of the sketch which made you think they were not going for the obvious stereotype angle, but then there was a double twist which played right back into a negative stereotype about a certain type of big black man from the streets. Very disappointing and utterly at odds with ITV’s statement about not undermining black people by broadcasting negative stereotypes.

The sketch about the gang initiation with the big black gay guy was quite funny I have to say. This was one sketch that worked quite well and seemed to have been well thought through and put together. It demonstrated that, along with the Ian Wright sketch, there are some good creative ideas within the team that need developing. If there could be more scenes of this quality then Ty & Ky could produce a good show next time.

Further negative stereotypes were shown when the two actors went for an audition in front of a white man and woman. The sketch they had to act out related to them stealing a woman’s handbag. Initially the actors challenged this negative scene they were asked to act out. Good, but then it soon reverted back to negatives, which was rather depressing.

Da News scene had a neat line in it, dovetailing with the previous scenes, saying, “We’ve gone from doing the crime to reporting the crime.” This sketch had Ty & Ky as news anchors and weatherman (girl) … yes a man in a dress and weave. Incredible. Just when it couldn’t get any worse we have the old Black man in a dress, emasculation thing going on again. I applaud Dave Chappelle for taking a stand against such foolishness and refusing to wear a dress when such a scene was added in to a film he was making – that was not in the script.

There was some really funny scenes in the show, highlighting the capability of Ty and Ky to produce a good sketch show. If they focus on the funny which worked well, this could lead to a more consistently funny programme. As stated earlier, ITV are to be commended for giving a chance to so many new comedians and production companies with this strand of pilot shows. Inevitably, with such a project you’re going to get hits and misses. I don’t know who’s to blame, but for sure, the Ty and Ky show was plainly lame and insane.

Review © Tiemo   Talk of the Town

The other three ITV2 shows – ‘Pranksterz’, ‘The Comedy Basement’ and ‘All About the Bants’ can all be viewed on ITV Player until 2nd December 2015. Please feel free to share your views on here if you get to watch them.