You wait 19 years for a replacement to the much loved stand up comedy and sketch show ‘The Real McCoy’ then, like waiting for a bus, 4 new black comedy shows come along at once. That was the situation TV viewers had at the start of November as ITV2 premiered 4 brand new pilot shows featuring stand up comedy, pranks and sketches. These were all broadcast in just 24 hours over the space of two evenings on 1st and 2nd November 2015.

Disappointingly, instead of host Eddie Kadi opening with some fresh new material to mark the dawn of a, hoped for, bright new Black British stand up comedy TV era, he offered some rather tired and dated material regarding clubbing and African accents. Sadly the only bright thing about his performance was his red boots.

Why was it necessary to reference his Congolesan roots so early in the show? Is it meant to be of some relevance? The skit re meeting “Killa” on the bus home was quite a funny one and built to a strong crescendo. As usual, he showcased his dance trained suppleness and litheness on stage, which the audience found entertaining. Amusing as it can be, it’s not really comedy? Perhaps he was using it as an audition for ‘Strictly Come Dancing’?

Funbmi Omotayo was funny. He had a nice delivery manner and the self deprecatory jokes re ‘fat Funbmi’ were good, although I think he does himself a disservice as he doesn’t look fat, just big … and there’s a difference!

The nationality material, I see a theme building here, worked well as it highlighted the dual nationalities that many African-Caribbean people have and the ability to be one or the other nationality when the moment necessitates it lends itself to good humour. He was on for a very short time and it would have been nice to have seen more of him. And no, that’s not a ‘sizist’ joke either! 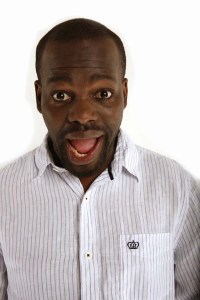 I’ve been aware of Daliso Chaponda for some time, but hadn’t had an opportunity to see him before now. I enjoyed hearing his accent and watching him attempting more political material than the other acts. He had a few nice gags and ended very strongly, but unfortunately the political material didn’t go down well with the audience, with too much of his material simply failing to hit the spot. A Black comedy audience is not often treated to political comedy by the majority of its performers so perhaps they are just not that interested in topical, political material.

Post interval, ‘The People’s Champion’ Slim took to the stage and stormed it with a strong and co-incidentally very topical routine. He opened with some fine gags re flying and whether there’s any real advantages to flying first class. Well, as you might suspect he could think of one main one. Being broadcast just two days after the Saini Egyptian-Russian plane crash (31.10.15) this might have been considered poor taste, but it was anything but and in any event was recorded prior to the crash.

I loved the jokes about cats, his children and that special “moment” when your responsibilities as a parent end. I wasn’t aware that such a moment ever arrives, but Slim, being Slim, found it and gleefully informed his audience of it! Many parents will enjoy that bit of knowledge.

Kojo closed the show. Considering he’s in his 30’s and been on the comedy scene for well over a decade I found his set fairly un-inspiring and juvenile – joking about clubbing, being a school child and having a friend call on him at 8am to play outside. Added to this was his father’s stern reaction to this young early morning visitor. Fine, if you’re an 18 year old comedian and this is a Saturday morning comedy show, but this is a post watershed show on after 11pm. Do people really want to hear childish schoolboy jokes like this at that time of night?

There was also old hat material regarding differences between white and black children. Again. It’s 2015. Kojo and most comedians have grown up in multi-cultural cities like London so do they really need to be broadcasting such material on stage, never mind national TV?

I liked his line, “I ain’t got no jokes, just issues.” Spot on. Not a good revelation from a comedian! Perhaps he would be better of developing and delivering new jokes rather than regurgitating themes that everyone’s heard before. I’ve seen Kojo many times and watched him develop over the years so know he can do so much, much better than that and my disappointment is that on this pilot show, on the country’s second biggest TV channel, he didn’t.

Overall, The Basement Comedy show was an entertaining show featuring three of the biggest names in the Black Stand-Up comedy scene and like many people I’d love to see more shows like this on our TV screens. If I was ITV I’d certainly commission a series of this show.

Review © Tiemo Talk of the Town

The other three ITV2 shows – ‘The Ty & Ky Show’, ‘Pranksterz’and ‘All About the Bants’ can all be viewed on ITV Player until 2nd December 2015. Please feel free to share your views on here if you get to watch them.

4 Responses to Comedy Gold unearthed in The Comedy Basement