The Man who attempted to do as much as such

“Every comedian should say something at least once that could kill their career.” So said Reginald D Hunter mid-way during the first half of his penultimate night of his latest oddly named tour, ‘The man who attempted to do as much as such.” he certainly  seems to be trying hard to and that one sentence best sums up Reginald D Hunter’s (RDH) modus operandi. He revels in shocking his audiences and seeing how far he can push the envelope.  RDH did so at this Hammersmith Eventim Apollo show, so much so he was somewhat thrown of course by a few irate feminist hecklers towards the end of the show. Much, much more on that later.

The show was a trademark heavyweight, thought provoking and challenging night of comedy and politics, with a strong emphasis on racism, sexism, gender politics, relationships (personal and family) and equality. I think the only thing he didn’t touch on was disability. Maybe that’s for the next tour! I think he got himself into enough trouble tackling this little lot.

Referring to recent tragic events over the past year in America, RDH brought an interesting African-American-British perspective to matters with his observations on the difference between American and British racism. According to RDH, American racists want you dead, whereas British racists just don’t want you anywhere near them, so just long as you’re away from them, they’re fine with that. Perhaps an overly simplistic analysis, but one with a grain of truth in it considering all that’s been going on in the last year or so. 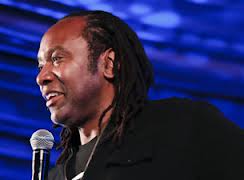 Talking to a man in one of the front rows he engaged him in a quick survey to check if his understanding of what Conservative party values are. Both were in agreement. The 3rd question very cleverly featured the “pay off” joke / political point to it pertaining to ethnic minorities. Funny and smart at the same time. I liked that.

His explanation of how his BBC2 programme ‘Reginald D Hunter’s Songs of the South’ came about was interesting and the experience filming the series provided him with plenty of funny and hair raising moments in it. He’s lucky to be alive following that particular assignment no thanks to the BBC!

He commented on the recent furore surrounding Rachel Dolzeol, the former NAACP President who claimed to be Black, yet was 100% white American! As far as RDH was concerned, she did a good job for NAACP and he had no issue with her.

There were some good jokes about his annus horribilis of 2013, which he described as his worst year in comedy, when he found himself in a media storm over his PFA awards appearance, relationship and HMRC troubles. The latter explains why we haven’t seen him tour much in England since 2013 and why he was essentially his own support act for this tour. Basically, the way he sees it, the HMRC are his new business partner, taking 52% of everything he earns. Seeing as the top rate of UK tax is 45% this strongly hints at HMRC not being satisfied that he had paid his taxes in full. That reminds me that a certain Mr Jimmy Carr also found himself in a spot of bother with HMRC in 2013.

Family matters were heavily at the fore in this show – talking about the sexual orientation of his niece and one of his younger brothers.

When coming to the conclusion of a fascinating and potentially controversial story relating to his niece he was heckled. He dealt well with the heckler, but moved on and chose not to go back to finish the anecdote/joke which was a real shame and caused him problems later in the show as it resulted in misunderstanding which may well have been avoided if he had finished the story.

He did this again in the following story. For an experienced Comedian (he mentioned that he’s lived in England now for 17 years and I presume doing comedy for a good 10+ years) I would have expected him to have mastered the art of dealing with hecklers, going off on a tangent and then seamlessly picking up where he left off.

At the conclusion of a lengthy anecdote re a friend who had been raped RDH made an off the cuff remark, aka joke, to conclude the story. It was a neat an unexpected punch line to this serious story that lightened the mood. The majority of the huge audience recognising the aside purely as a throwaway line, laughed away as they had been throughout the show.

However two women stood up to berate RDH saying he shouldn’t be making jokes about rape. The audience were displeased with their unwanted intervention and one or two shout out to them to basically “pipe down” reminding them that this is a comedy show. RDH was having none of this, wanted to hear what they had to say and encouraged them to make their point. They do and he responds by basically explaining and defending the jokes/circumstances surrounding them. He appears visibly annoyed and put out at having to do so, yet deals with the hecklers respectfully and seriously, with some good humour thrown in.

That was fine. The hazards of being a Comedian, unlike an Accountant or IT Manager, is that you can get hackled at work! As stated above it’s a shame he let them get to him. I think the show finished about 10 minutes earlier than expected so the heckles clearly touched a nerve.

What it inadvertently exposed is the lack of light material RDH possesses in his armoury and the fact that perhaps he’s not a natural comedian in the way a Jimmy Carr, Lee Nelson or Stephen K Amos is, to name but three comedians very adept at coping with hecklers, straying off course, then returning to the original joke. They’re also expert at “lighter” material.

Notwithstanding that, knowing RDH is a pretty serious guy, in keeping with his persona, his comment after saying “moving on to lighter matters” was classic and brought the house down. Tension defused. Job done.

I know there’s been some recent history of rape jokes doing the rounds on the comedy circuit – although I’ve not heard many of them. From my point of view RDH was not saying rape was anything other than a very serious matter. If anything, many people may have felt that the women complaining looked silly as it implied they didn’t “get the joke” which was in fact very supportive of victims of rape and in no way making fun of the awful experience. In a near 3,000 capacity audience only a few expressed an issue with it +/or didn’t get the joke. They should not have been allowed to disrupt the flow and enjoyment of the show for the majority. Arguably in fact, they owe RDH and everyone present an apology.

This was a lively, thoroughly entertaining, funny and moving show from RDH. It dealt with politics, racism, sexism, gender and family politics seriously and humorously.

Once again he showed himself to be a master of confessional/observational comedy. He has a unique voice and comedy persona which always make seeing his latest shows must see events. RDH bares his soul and inner thoughts on stage with refreshing candour and honesty. He couldn’t care less that he can look like the bad guy, for his aim is two way openness, honesty and willingness to engage in dialogue and find the truth, especially from a man’s perspective, on matters that many others would rather shy away from and would not dream of bringing out into the open. This is why he allowed his hecklers a say and responded respectfully to them both on stage (and I note to other commentators on twitter afterwards).

Whilst he’s clearly unhappy with his closer working relationship with the tax man which mean’s he “shares” 52% of his earnings with him, thankfully Reginald D Hunter was more than happy to give 100% of his efforts on stage to his audience.

This entry was posted in Comedy Reviews, Comedy Reviews 2015 and tagged reginald d hunter, the man who attempted to do as much as such, Tiemo Entertainments Funny Ha Ha. Bookmark the permalink.