Whose side are you on? London Hammersmith General Election debate 2015

Whose side are you on?

Whether or not the televised Leaders debates on Thursday 2nd and 16th April 2015 helped you decide who to vote for or swayed you away from your favourite party, it is clear from the polls that this is going to be the closest fought general election battle for some years.

The debate will be an important part of the election process where, judging by the opinion polls, there is not much between the Conservative and Labour parties, with them polling around 33% each,  meaning another hung parliament is the most likely outcome of this year’s general election. With everything to play for every vote matters, as even the 3rd, 4th or 5th ranked parties may have a say, or even form part of a new coalition government.

With national debt at record highs of £900 billion, which party offers the best solution to reducing this?

The NHS will be covered too,  also with a particular focus on its financial health. With proposals to close the A&E’s of Central Middlesex, Charing Cross and Ealing hospital’s and reports saying the NHS requires an extra £8bn per annum, on top of the £101bn per annum they are getting for 2015/16, which party will do the best for the nation’s health and does the NHS really need another huge injection of cash?

On the international sphere, with Libyan migration high on the agenda – should Britain be doing more or should the country stay away and take the stance that this has nothing to do with us?

Is Britain better off in or out of the European Union? UKIP claim it’s costing the nation £55m per day and that by withdrawing from Europe, this money could be put to better use. What do you want? At these debates you will get to hear where each party stands on this topic.

Questions for the panel can be emailed in advance via bookings

Candidates will speak mainly on national issues affecting Londoner’s and all British citizens and voters. 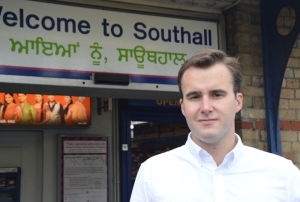 James Symes is a Chartered Accountant who lives in West London.  Before qualifying as an accountant he set up an award winning manufacturing business making bicycle parts in the south west. His business interests made him realise the effect and importance of political decision making. James joined the Conservative party because of their commitment to the British economy and the hardworking people who support it. He believes that a free market with responsible businesses leads to a fairer society for all.

James studied Accounting and Finance at Exeter University and from there joined a top four accounting firm. He is part of the committee of City Future, through which he helped Liam Fox with his book Rising Tides. Also, he used his technical skills as an accountant to help set up a Free School.

James was born in London and now lives there, he sees himself as a Londoner enjoying the benefits of a fast moving city.  He also enjoys going out to the country and takes an interest in rural affairs.

Andy Slaughter is a British Labour Party politician and was Member of Parliament for Hammersmith from 2010 until March 2015.

He had previously been MP for Ealing, Acton and Shepherd’s Bush from 2005 to 2010 and before that, Leader of the London Borough of Hammersmith and Fulham Council. He is currently a Shadow Justice Minister, serving on the Labour Party’s frontbench.

In his early thirties he studied Law, qualifying as a barrister in 1993. He practised from the Bridewell Chambers in Blackfriars in criminal and civil law before specialising in personal injury and housing law. He stopped practising when elected as MP for Ealing, Acton & Shepherds Bush in 2005.

Andy’s interests include the Middle East and particularly Palestine. He is Secretary of the Britain-Palestine All-Party Parliamentary Group (APPG) and Vice-Chair of Labour Friends of Palestine and the Middle East. His interests are reflected in the other APPGs of which he is a member, including country groups for Bahrain, Somalia, Albania, Kosovo and Spain. He is a member of Labour Friends of Poland and of the Caribbean, and of domestic groups for Crossrail, Housing, Gypsy Roma and Travellers, and Conflict Issues.. He has campaigned against increases in Air Passenger Duty, Heathrow expansion and the planned demolition of social housing by the Conservative Council in his constituency.

David Akan works in construction as a Planning Manager and lives in Hammersmith with his wife.  David was the first in his family to go to university, where he studied politics and history.  He has been a keen activist ever since, campaigning on a wide range of issues from local allotments to prisoners of conscience.  He decided to join the Green Party because of its focus on thinking long-term to build a sustainable economy and environment.

“The Green Party believes in a fairer society and a politics that looks to the future.  As a Green, I would reverse the privatisation of the NHS and keep local services open to make sure everyone has access to quality local healthcare.  At the same time I would ensure that those who care for sick and elderly relatives or friends, currently saving the NHS £119 billion a year, get the support and assistance they deserve.

I would push to make affordable housing genuinely affordable for the average local resident and push for the community to be consulted before investors about any new projects, so that developments always serve the community. I would increase the minimum wage to a living wage to help the 1 in 5 London workers still earning less than the living wage.  I would work to end the more than 4,000 premature deaths in London each year caused by air pollution and create a healthier, more pleasant city by building safe cycling lanes and pedestrian friendly streets.  I believe it is vital to take action on climate change by supporting Britain’s growing renewables industry.

The effect that smaller parties are having on the national debate shows that voting for what you believe in is never a wasted vote.”

Millicent has a burning interest in equality and social justice. Her professional background is in the charitable and public sectors where she has worked tirelessly to promote education and engage young people in decision-making. She has also worked for the Financial Times where it was her role to engage with international customers.

“This is a crucial time for people in our constituency.  In a democracy the power lies with the people. That’s why I want to see a wider range of people in politics. Through building a fairer society we can build a stronger economy and provide opportunity for everyone.”

Richard Wood has lived in Hammersmith since 1984 and is a Freeman of the City of London. Richard has over 50 years experience in a diverse variety of businesses. He set up his first interior design company when he was 18 servicing local government offices, NHS Retirement Homes, Hospitals, Central Electricity Generating Board, Schools and local authorities.

In 1970 he set up WPC Decorators, contracting to all the then leading house builders as well as major companies in the UK including the NHS, Ministry of Defence, BP, British Rail and United Draperies. He soon diversified into timber-framed houses, building several hundred across the UK, and several show homes in Saudi Arabia.

In the mid 1970’s his business further diversified into large steel framed buildings employing by this time over 180 staff.  Richard left the company in the late 70’s and moved to London where he went into barter trading, importing to America from Bulgaria financial products worth US$ 20 million in total, and in the 1990’s he signed a contract with the Rover Group worth £27m to export Land Rover vehicles to the Far East; both deals have given him the diversity of interests and contacts in overseas markets.

Sherryl Blu is an all-round creative individual that loves to talk! Unafraid, forthright, vivacious and loud are just some of the words that describe Sherryl.

Whilst she loves music, she also loves to chat and explore subjects that others are reluctant to talk about.  She previously held down a successful weekly chat show that allowed her to expand on this passion. Sherryl currently presents the Weekend Vibe show every Saturday between 1-4pm on Westside radio as well as produces and co-hosts an entertainment podcast. Sherryl can also be found blogging over at The Rinse on-line

The debate will be recorded.  By entering this event you agree to being filmed or photographed which may be used for marketing or promotional purposes. If you do not wish to be filmed please inform the organiser in advance or on arrival.

7 Responses to Whose side are you on? London Hammersmith General Election debate 2015