At long last. The wait, the hype was finally over. No, not the end of the General Election !!  I refer of course to the long awaited, first and only scheduled Leaders debate that included David Cameron, Prime Minister.

Talk radio stations must have thought it was Christmas as they could not stop talking about the debate all day long in much the same way the sport media hypes up a big heavyweight title fight or major world cup football match featuring England. The question is, did it live up to the hype?

In short I don’t think it did. I think most of the leader came across pretty well, were polished performers and knew their facts. The fact that a number of polls had David Cameron, David Miliband, Nigel Farage and Nicola Sturgeon and/or Nick Clegg level pecking at 21% as “winners” of the debate showed how the viewers couldn’t separate them at the debating podium. 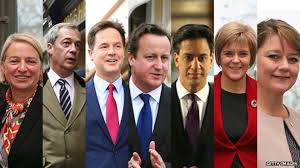 I enjoyed the cut and thrust of the debate as they debated and tried to score points of one another on the NHS, the economy and immigration etc…

I think these debates, for the big parties were more about not losing face, not making gaffes and appealing to the un-decided’s yet to make up their mind where they will cast their vote on May 7th 2015.

At 2 hours it was far too long. It’s not often I’m crying out for ad breaks, but this programme certainly needed a lot more than the one it had at the hour mark! I wonder why as ITV usually fall over themselves to offer as many ad breaks as they can. I can only imagine some arcane electoral rules precluded this.

I found the debate and the atmosphere somewhat sterile at times and made me wonder why this could not have been simply done in tried and tested Question Time format, with the seven leaders sat around a table, taking questions from the audience and host, thus generating the cut and thrust of debate that this show usually gets. It seemed as if the audience were shackled, not allowed to clap or cheer anything and it seems as if only about 4 questions (in 2 hours) were asked by the audience. Why have a studio audience if they aren’t their to add atmosphere to a TV programme? Isn’t that normally the reason for filming in front of a “live” studio audience after all?

Some in the media criticise Prime Minster’s Questions for its rowdiness, but I love it and that bear pit drama is very exciting. It’s amusing that the media and political rivals say Cameron has chickened out of debates with Miliband, yet he’s been going head to head v him every week for the last 5 years and generally getting the better of the Labour Leader, so other than having more to lose if he did lose a debate, I can only think that that is the only thing stopping Cameron from taking on Miliband on TV.

I didn’t think host Julia Etchingham did very well. She rarely interjected with any off script or probing questions. She mainly intervened to stop panelists speaking for too long, interrupting one another or just to direct set questions to each panelist. The set and her attire, though very nice, transpired to make it look like a political episode of ‘The Weakest Link’. On this showing I think Leanne Wood, Natalie Bennett and Nicola Sturgeon would have been thrown out as weakest links. Whilst they talked a lot of common sense at times, they were far too parochial in their opinions, speaking to minority sectors – environmentalists, the Welsh and Scots, not really saying anything for English people who make up the majority voters in the forthcoming general election.

Some may argue they should not have been in the debate, but in the spirit of opening up debate to all national parties and in giving a voice to alternative opinions I think it was a good thing to have wider views getting national coverage, that they so rarely get.

Love him or loathe him, the effect of this in recent years has seen the rise of UKIP and the standing of its leader Nigel Farage almost be seen on a par with the major parties. If the country ever wishes to break away from Labour or Conservative then this widening of national debate has to happen, otherwise the status quo will remain forever.

The debate was a good idea and I look forward to the next TV debate on the BBC 16th April 2015.

By Tiemo Talk of the Town

Whether or not the Leaders debate helped you decide who to vote for or whether or not it swayed you away from your favourite party, for most viewers and voters, even those in the audience, it was mostly a non-participation event.

If you prefer the opportunity to join in the debate and pose questions, we are delighted to announce that Tiemo Talk of the Town shall be hosting two general election debates in the Hammersmith and Ealing constituencies on the 28th and 30th April 2015. These will offer people the chance to grill potential MP’s on local and national issues affecting Londoner’s and all British citizens with a stake in the future direction of Britain.

Tiemo will be working in partnership with Ealing, Hammersmith & West London College to host these debates which will include the prospective parliamentary candidates for both of these important West London constituencies.

These are free to attend. Further details and the booking of tickets to secure seats can easily be done on-line here.

To vote in the election you must be on the electoral register by not later than 20th April 2015. Registering takes just 5 minutes.

4 Responses to The Leaders Debate