Are the Police a spent force?

Posted on October 30, 2013 by Tiemo Talk
Cops in Crisis: What Seems to be the matter Officer?
Institutions in crisis?
Cinema 2 – Barbican Centre,
London
Saturday 19 October 2013

’From ‘Plebgate’ to the police cover-up of their role in the Hillsborough disaster, the phone-hacking affair and the revelations of police spying on the Lawrence family, trust in the police seems at an all-time low.  When police officer Simon Harwood was found not guilty of killing newspaper seller Ian Tomlinson, one broadsheet argued the Police Complaints Commission needed greater ‘teeth, guts, autonomy and drive’ to correct a ‘moral crisis’ at the heart of policing. Most recently, the seemingly unethical behaviour of undercover officers working for the Metropolitan Police’s Special Demonstration Squad has led Theresa May to announce new vetting procedures as part of a new ‘integrity charter’, and Prime Minister David Cameron raised eyebrows when he described the British police as only ‘relatively honest’. 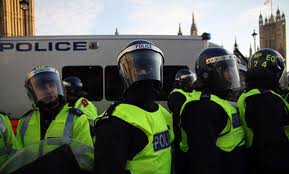 Traditionally, the role of the police was to protect individuals from crime and disorder. Today, they not only stand accused of restricting free speech and free assembly by arresting tweeters and kettling protestors, but seem embarrassingly inept at dealing with public order situations. During the August 2011 riots, with a risk-averse police force failing to provide basic security, members of the public took to the streets to defend their livelihoods and communities; even the pro-police Tories denounced their ‘timid’ response. In other areas of life however, the police seem to be reaching far beyond their historic brief, whether by arresting football fans for singing offensive chants, or issuing on-the-spot fines to people drinking in public places or dropping cigarette butts. Wider powers to intervene in domestic disputes and the extraordinary amount of energy the police are devoting to investigating historical sex abuse also seem to indicate a new focus for policing.

Is this the worst of both worlds; draconian and petty regarding individual behaviour, strangely fearful and absent when maintaining public order? How can it be that police have simultaneously hollowed out as an institution, no longer representing the moral order of the crown and state, and yet established completely new forms of social control? With increasingly confusion about what the police are for, how should their role be defined?

Tiemo Talk of the Town review

Some of the questions that required addressing in this Battle of Ideas:-

The first speaker, Kirk Leech talked about his un-favourable past experiences with the police. Although he had been arrested no less than 8 times he was not against the police and was concerned about the mess that they were in. Leech believes that the institution is suffering from apathy and contempt and they no longer know how to operate. This was somewhat supported by Clive Boom (professor, Middlesex University) who reminded us that when the force was initially set up it had a civilian arm not paramilitary; more guns are carried on the streets now by officers. By consensus the police force should serve the public. We should see them as providing protection. However most people have become weary of them as they are now authoritarian in their approach.

The police have lost control, they perceive themselves as a permanent fixture and it would seem, answerable to no one. They have become an intrusion in our lives (far more than years gone by), and there is a lack of integrity about them. There is apparently a lack of accountability and awareness and morality goes “out the window” the higher up the hierarchy you go! The reduction of crime has less to do with the police and more to do with other agencies tackling the issues.

Dr Jacki Tapley (Principle Lecturer – Institute of Criminal Justice Studies, University of Portsmouth) shared that if the police are not learning anything new, they are not going to develop and move toward accountability. Professionalism within the force is long overdue.

However not everyone was “gunning for the police”. Interestingly, David Petch (retired commissioner –Independent Police Complaints Commission – IPCC) shared that it is the public who have changed their attitudes and therefore they are responsible for the policing that we now have! Crime is changing and the public’s expectations are higher. New legislation means more police involvement. In addition a great deal of red tape (e.g. health and safety protocols) means their “hands are tied”. Petch does not believe that the police force is in crisis and rejects the view that there is systemic dishonesty within the force.

One member of the audience shared his concern that the IPCC is made up of police who then investigate complaints against the police. How can this possibly be an independent enquiry? His idea of an alternative body to deal with complaints that was truly separate from the police was the way forward. He also suggested that the police might benefit from being accountable to some other body, as opposed to a government agency.

©Tiemo Talk of the Town

1 Response to Are the Police a spent force?