The Abyssinians and ChainSka Brassika

The Abyssinians and ChainSka Brassika

The Jamaican roots reggae band were fronted by what appeared to be a curious mix of 3 lead singers, all  grey bearded, slim elderly gentlemen. Their music was melodic and rhythmic and had the packed crowd swaying and singing long to the Jamaican beats emanating from their talented musicians. 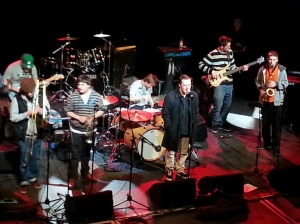 I came to see The Abyssinians, the roots reggae band from Jamaica, but ended up being far   more impressed by their support band Chain Ska Brassika (click link to watch video). The South East London band reminded me of the Bristol combo Babyhead and Madness. 9 white men doing reggae. What a ting to behold! There music was upbeat, vibrant and very lively. The lead singer was having fun dancing away with his nifty dance moves and had a pretty decent voice too. I’d not heard of them before and would certainly go and see them again.

Both bands are currently on tour.

©Tiemo Talk of the Town

The roots harmony vocals trio the Abyssinians was formed in 1968 by founding members Donald Manning, Bernard Collins and Linford Manning. It was in 1969 with their release “Satta Massagana” recorded on Coxson Dodd’s Studio One label—a Rastafarian hymn based on the Ethiopian Amharic language, that launched them into the ranks of Reggae music greats. “Satta Massagana” became one of reggae’s most popular songs; becoming an anthem that was heard on the radios, in the dancehalls and in the churches of Jamaica. It was also covered by many other International artists’ including Third World.

ChainSka Brassika are a 9 piece ska-fuelled, energetic reggae and dub band from South East London. Their lively old-school ska sound combines with the skank of today’s bass culture and commands any audience get up and dance. Their first single, ‘This I Know’, was released in early 2013.

They have played at numerous venues across London and the South, including Hootananny, Gaz’s Rockin Blues,100 Club, The Blind Tiger Club, Mr Wolfs, and made headway on the UK festival scene with gigs at Small World Festivals, Plymouth Volksfest, Landed Festival and Playgroup Festival. This year they’ll be adding a substantial amount to this list. So far they’ve enjoyed support slots for Mad Professor, Musical Youth, Dawn Penn, Love Grocer, Gaz Mayall & The Trojans, Jerry Dammers, Dirty Dike & Jam Baxter and supported The Abyssinians in May 2013.

This entry was posted in Concert reviews and tagged abyssinians, babyhead, chainska brassika, clapham grand, the abyssinians. Bookmark the permalink.

7 Responses to The Abyssinians and ChainSka Brassika