It’s akin to a non-League football club rapidly winning successive promotions in no time at all to join the elite of the Premier League And not just being satisfied with that either, but going on to win the Premier League in under 6 years. It just doesn’t happen does it?

Yet the comedy equivalent has happened to Michael McIntyre. He consistently remains at the top of the premier league of comedians year after year. Michael McIntyre’s the Manchester United of English comedy.

I remember seeing Mcintyre at the Edinburgh Fringe circa 2006. He was unknown then, yet delivered a superb show that to me, and all who saw him, marked him as a man with the potential to go far.

From being the non-league, un-signed Comedian trying to make a name for himself at the annual festival of comedy that is the Fringe, he’s now playing at the mecca of football, Wembley. Well, to be precise, right next door to the famous stadium, Wembley Arena. A home match for the proud North Londoner.

At a venue more used to hosting ‘A’ list rock and pop bands, it is nowadays no stranger to hosting ‘A’ list comedians. It’s been said for a few years that comedy is the new rock n roll and with Mcintyre having played 6 nights at the O2 and 6 nights at Wembley on his mammoth 71 date 2012 tour he’s definitely playing to more fans than most rock bands.

The show’s are just as commercial too and you’re left in no doubt that, as well as making people roar with laughter, he’s there to make a lot of money on top of the enormous revenues generated from full houses at £35 a ticket. Video screens beam out the advert ‘Love the show, Buy the DVD’. His first DVD, ‘Hello Wembley’ was the biggest selling first DVD in British comedy history and I suspect thousands upon thousands will be sold in the run up to Christmas.

The show opens with great use made of the video screens (necessary in the cavernous Wembley arena) as they amusingly show Mcintyre getting ready to come on stage.

As is his want, he then bounds onto the stage with a cheery “hello” to all sides of the arena. Zooming in on the front row he spots his first victim of the night, Zena, wearing lovely white ear muffs. Probably quite wise on this cold, December night, but not exactly vital indoor apparel.

Mcintyre relieves her of them, puts them on and proceeds to create laughter for all. Both the ears muffs, her unusual name and it’s spelling were spontaneously engaged as comedy vehicles for McIntyre’s wit and humour. He amusingly and whimsically progressed to jokes about other names.

There’s a wonderful simplicity to McIntyre that has the ability to find the funny in the most innocuous, everyday and relatively banal incidents and translate them into hilarious, original comedy routines. What’s so amazing is that you just wouldn’t expect their to be jokes in such events, but Mcintyre finds them. Mcintyre’s the Joke digger that drills down for jokes where you’d least expect them. It’s what McIntyre does best, ‘better than all the rest’, as Tina Turner would say. This is the beauty of live, unscripted comedy. Brilliant. 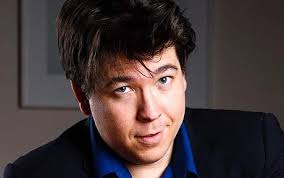 Time after time he just finds the sweet spot of the comedy ball, whether it’s jesting about the ludicrous, time consuming and frequently maddening process of online ticket purchasing to everyday domestic arguments with his wife and two young children.

The story of his wife “losing it” over his habit of opening new bottles of milk before the old are finished was hilariously and so passionately told you just knew it had to be true. As with many seemingly trivial arguments, the incident isn’t the real reason for the eruption. Oh no. That is just the lava on an erupting volcano. Once erupted you can’t stop it and have to wait for it to, or rather hope it will blow itself out.

Obviously Mcintyre uses his shows as an opportunity to exercise. He must do, the way he is always on the move and never standing still for more than a few seconds. 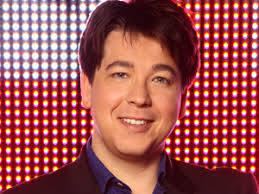 Tonight he excelled himself with funny walks, facial contortions and accents as he told hilarious accounts of a painful dental experience and the infinitely more pleasurable and highly amusing (“it’s the way he tells em”) experience of watching his wife put on tights.

The accents were spot on too, such as the Angolan woman’s accent or the Scottish accent when telling the story of his chance meeting with tennis star Andy Murray in a restaurant.

This was a truly great show. From start to finish it was laugh out loud, rock your head back and forth funny. Even the encore was hilarious. The show never flagged or faltered for a moment. Joke after joke and story after story was superbly told. The jokes flowed and didn’t only rely on the punchline for the laughs. But what punch lines. They always hit the spot, delivering knock out blows time and time again.

He’s obviously conquered England. It’s now time for McIntyre to broaden his horizons and try to conquer America and the rest of the world. He has the ability to do so and should he wish to there would be no stopping him.

If there was a Champions League of comedy, McIntyre would be Barcelona. He’s setting the standards and achieving the award winning, stratospheric success every comedian aspires too.

The Champions League Final returns to Wembley again in 2013. If there was one for comedians Mcintyre would be a finalist every year.