Lee Nelson has carved out a niche for himself with his lad about town character. The live tour pretty much replicates his BBC3 ‘Lee Nelson Well Good Show‘. You get exactly what you expect; bawdy, crude jokes, smut and good natured audience banter with sharp, quick fire, witty retorts to audience comments.

Lee engaged with a member of the audience who was from Liverpool. After some initial chat he interjects, “Aren’t the Beatles from Liverpool? Pause. “Yes.” “Just checking as you hadn’t mentioned it for 2 minutes!!” Much of the act is very funny, but unprintable on a family Blog.  I won’t repeat the one about women from Leeds, in case Lee’s gigging there anytime soon! 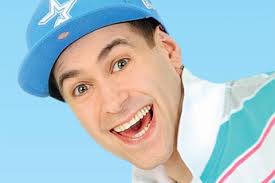 As with his TV audience, Lee attracts a wide age range of mainly working class fans to his live gigs. Tonight the ages ranged from around 14 (far, far, too young) up to a 77 year old gentleman. The latter he gently ribbed about meeting his wife of 38 years. When the gentleman struggled to recall where they met Lee joked “it must be hard to remember as there were probably bombs going off at the time”.

Lee also persuaded a young Bulgarian woman to mimic the “compare the meerkat” advert. He had to push her to repeat the famous words but it was worth the wait as it sounded very Meerkatish if that’s a word, or perhaps it just sounded amusingly authentic said in a real Bulgarian accent.

The show was pretty much a repeat of the Chiswick show he did in September 2011 which was a pilot for this tour. I found that show absolutely hilarious, this one less so, not because it wasn’t funny, just that the surprise factor wasn’t there.

I think the main weakness of the show relates to the Omelette character and Quiz segments.  For a while we had a stand in Omelette…. well done big Paul (a guy plucked out of the audience as a volunteer and nicknamed Scrambled Eggs!).  However watching “Scrambled Eggs” struggling to zip up his grey tracksuit (loaned to him to be in character), created the highlight of the show. Lee kept stressing simply and repetitively, “You click the zip together and pull it up. You click the zip together and pull it up.” This must have gone on for a good couple of minutes, before Scrambled Eggs accomplished the task. This even had the audience roaring with laughter.

The quiz show where a father and son (the Farnworth’s) compete against father and daughter (the Case’s) was cringingly funny as a series of crude questions are posed such as asking the children (the son looked about 20, the daughter about 18) questions such as, at what age their father’s lost their virginity, what their father’s favourite sexual position was. Funny as these elements were, they went on for far too long. Also the sight of a pole dancing, brief wearing, Omelette was not a pretty, but alas is one that’s hard to shake from the memory bank. Lee’s speciality is wise cracking gags and audience banter showcasing his quick wit. More of that and less of the quiz show would be better.

There was an unintended funny moment when Lee’s lying on the sofa reading out an ’emotional letter’. A noise goes off like a baby crying. I wondered if this was part of the act as it curiously seemed quite apt. It wasn’t. In fact it was a man with a disability emitting noises and shaking his head and upper body involuntarily. Although the audience were surprised by this, Lee took this as opportunity to show off his quality comedic skills. He states, “Enough of that. I don’t care if you’ve got only one arm or one leg, I’ll take the mick out of you!” Everyone laughed. Lee’s the last comedian you’d say is politically correct, but in a very funny, inclusive and non-patronising manner (by finding the funny in the moment), he made a man with a disability feel very much part of the show without making him feel picked on.

Lee also dealt very expertly with hecklers, who a little emboldened by drink could have derailed the show.

He does push the boundaries to the limits with his cheeky chappy shtick, but I think this is why his fans love him and are so loyal. Testimony to that were the lengthy post show queues to purchase his new DVD.

The Lee Nelson Tour finishes in Southend on 7th December 2012. Tickets for this and his Lee Nelson Live DVD can be purchased on-line.