“Congratulations Adele. To those unaware, earlier today Adele gave birth to a  beautiful, bouncing, 68lb baby boy!!” With that side splitting funny, but cruel opener, the legendary American Comedienne Joan Rivers loudly and with humor, announced her arrival at the prestigious, regal stage of London’s Royal Albert Hall. Whilst her bawdy language lacks majesty, there’s little doubt that Joan Rivers is still the undisputed International Queen of comedy. She’s been thrilling audiences for more years than she cares to remember and on this, the last night of ‘It’s Now or Never‘, her short British tour, she made it crystal clear she’s fully aware of her ‘mature’ years.

“I hate old people. Yes. That’s’ right. Can you all just leave now?” she bellowed. Why, one wonders? “Because you remind me of my age!”

This was a theme picked up hilariously by her superb warm up double act who joked that, “Joan’s lasted a lot better than many of her peers such as … Tutankhamun.  Joan last played here a very long time ago …  when the Royal Albert Hall was built.” Regardless of her advancing years, this lady’s still got it. In abundance. Joan delivered her full repertoire of trademark one liners, cutting, bitchy jokes that weren’t for the feigns hearted. Celebrities, the disabled and for some reason, Mexicans, bore the brunt of her acerbic jokes. Diana Ross, Barbara Stressed, Naomi Campbell, Adele (yes the singer again), Angelina Julie and Jennifer Anise all got it in the neck from Joan.

Not even the deceased were safe from Joan’s deliciously wickedly funny sense of humor. Michael Jackson and Whitney Houston weren’t spared Joan’s wicked sense of humor. In another Comedian’s hands, think Frankie Boyle, such material, would have a mean, course edge that made you feel uncomfortable  with the performer. Coming from Joan’s voice the jokes are barbed, but funny and don’t leave a bad taste. Instead one is amused by her frankness, rather than exasperated by the mean spirited, vile, spite that spews forth from the frank speaking Frankie Boyle’s mouth. I did find there was just a bit too much base humor in her act, with an overuse of crotch/vagina gags. Whilst of course you expect a certain amount of that, after all she’s renowned for it,  for a woman of her standing I would have preferred a little less crass and a lot more class. I also think the show would have benefited from having more of a coherent theme and less of Joan’s rushed, scatter gun delivery of jokes. 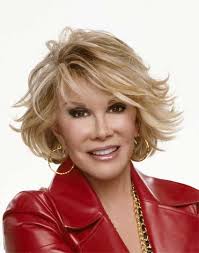 Joan might well be considered the Queen of comedy, but she certainly wasn’t the only queen in the castle tonight. When she asked, “Where are my gays?” She got the loudest response of the night. It was as if the whole of the stalls was just a sea of queens, from Row A, stretching right the way back to Row Z. That was quite a surprise. I was half expecting a put down from Joan, but not at all. She was in her element and loving the gay love. They were just about the only group that didn’t come under fire on the night.

I’m not sure why the 3 piece orchestra were on stage. It seemed to me a waste of their time and talent, as aside for the pianist being a foil for one of Joan’s jokes towards the end, they were never called upon to play or speak. Strange. This show was terrific fun and it was a real pleasure to experience the grand old lady of comedy, in all her glamorous glory, performing at one of the world’s grandest stages, the Royal Albert Hall.

Overall this was a great and fitting first class venue for the international queen of comedy Joan Rivers to end her first British tour for seven years.

Let’s hope it’s not another seven years before she returns. After all, who wants to see a 167 year old wise cracking woman blasting out weak bladder jokes?