One year on: What on earth did the riots change?

One year on: Assessing the state of the nation

Battle of Ideas 2012: After the riots
Barbican Centre
Saturday 20 October,

In the aftermath of widespread rioting in English cities in August 2011, responses revealed predictable fault lines among the commentariat. The tabloids wrote of feral criminality, while conservative voices suggested the legacy of the permissive Sixties explained why England was going to hell in a handcart. More radical commentators like Darra Singh, who chaired an independent inquiry, turned to familiar ‘social factors’ such as unemployment and lack of opportunities for young people. Some even saw looting as a form of protest against ‘brutal cuts’ and austerity measures. A Guardian/LSE study, Reading The Riots, concluded that the rioters were ‘rebels with a cause’, with 86% of the 270 rioters interviewed claiming the violence was caused by poverty, 85% policing, and 80% government policies.

On closer inspection, however, the competing explanations shared certain common themes, indicting the contemporary British way of life and calling for greater state intervention to keep it in check. David Cameron claimed the violence was due to bad parenting and ‘Broken Britain’. Ed Miliband rebranded violent rioting as another expression of a ‘me first’ culture driven by hyper-consumerism. The government’s panel report slammed a wider culture of ‘materialism’, implying aggressive brand advertising has corrupted impressionable youth. ‘Britain’s riots are the consequence of a greedy society’, asserted the Guardian‘s Seumas Milne, while Peter Oborne of the Telegraph claimed the rioters were ‘just following the example set by senior and respected figures in society’. Naturally, the law‘n’order lobby argued people need stricter social and moral codes, and endorsed the ‘exemplary’ punishments handed out (six months in jail for stealing chewing gum; four years for trying unsuccessfully to start a riot through Facebook). Elsewhere, more liberal-leaning commentators called instead for parenting classes, family-therapy centres, youth clubs and so on. But might such headline-grabbing policy initiatives, whether punitive or more therapeutic, distract us from explaining what really happened and why?

How do we account for the seeming demise of social solidarity? One striking feature of the riots was the loss of the authority of adults – parents, teachers, neighbours – over younger generations. Is it really just a ‘me first’ attitude that motivates people to destroy their corner shop or burn down their neighbour’s home? Or might we ask what fuelled the looters’ inflated sense of entitlement and grievance? Might some responses to the riots have continued to foster an assertive victimhood? Might the normalisation of welfare dependency – such that people regard claiming benefits not as a temporary phase but as a way of life – be partly to blame? Might widespread evasion of these bigger issues represent a greater threat to society than the damage caused by the rioters themselves?

Tiemo Talk of the Town Review

Though all of the aforementioned important questions, particularly those asking ‘where are we now?’ and ‘what caused the riots?’ are two stand out questions, I’m even more interested in focusing on what the riots achieved and assessing what, if anything, did the rioters hope to achieve?

To answer those questions it is necessary of course to look at the causes and, as per the debate topic,  assess the state of the nation today.

There was a near consensus amongst the panelists that the riots lacked a certain passion, that there was an absence of real authenticity to the carnage being inflicted on some of our cities. Emiritus Professor Frank Furedi has experienced four riots and said he felt that the rioters overall showed little emotion. This, he posited was, “indicative of a public life bereft of meaning. People were basically shitting on their own doorstep. Rioters usually create havoc “elsewhere”, (well away from their homes), so this was indeed very rare.

There was an absence of social solidarity at the heart of it, highlighting a breakdown in social cohesiveness and community. 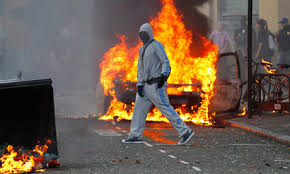 Continuing the theme Zoe Smith, Guardian Journalist, viewed the  disturbances as “little more than a prison riot.” One man in the audience agreed saying that the scale of the riots was very muted. He doubted that we are really living in an age of unrest on the basis that if we were there would be a lot more riots.

David Lammy, Labour MP for Tottenham and Author of ‘Out of the Ashes: Britain after the riots’, said the problem lies with the workless poor and the overt capitalism in Britain. He criticised Labour for introducing 600 performance indicators and 300 criminal legislation acts as their solution to social and criminal problems. Spending more on tax credits was not the solution either. Some of this was necessary, but it was wrongly focused and there too much of it.

Zoe, continuing David’s theme, said “Labour privatised everything. Adult social care became 75% privatised. Only Sure Start (children’s centres) weren’t and they work very well.”  Attacking Labour, she stated, “It’s Labour’s fault we’ve got a work less poor. I can understand their plight. People would be stupid to work if they get more not to via state benefits.”

Stuart, a Teacher from Newcastle in the audience, said “We need to challenge more. Challenge idiots. Bad language. Poor grammar. We need to stop being so offended too, for instance, by mere words. Think of the whole “plebgate furore.”

David Lammy agreed that we need to challenge people, e.g. youths peppering their conversations with the word “innit?” who don’t know how or when to speak correctly in situations, such as interviews, where good English is expected.

This is a good point and one which we all, as responsible adults, need to be mindful of as we go about our lives as it can only be for the greater good if everybody plays their part.

He said that 75% of Black youths in Higher Education in London are at London Metropolitan University and that Labour’s proud of that. He isn’t as he’d prefer to see more studying at Russell Group universities.

I’m not sure re this figure. It seems extraordinarily high. I agree that the ambitions of young people should be aimed higher.

Zoe Williams felt there was a deliberate bias against recruiting English people e. g. Pret a Manger know that English people will demand proper contracts e. g. 40 hours per week contracts, not zero hours ones and women may well at some point require time off e. g. for maternity leave as they are rooted here. By recruiting non-British citizens they deliberately circumvent this but by so doing disenfranchised a significant proportion of the indigenous population and when that happens one of the outcomes is the riots.

David Lammy said we’re living in very atomised times. He said too many people don’t understand social norms, don’t know how to behave so it’s little wonder they can’t get employed. The Met Police need to be more reflective of the population it serves. Of 32,000 Police Officers, only 832 (3%) are Black.

I am in agreement with the panelists that there were a number of deep-seated social problems that in part were a contributory factor behind the riots – high unemployment, high immigration, jobs going to recent arrivals, non-permanent British citizens, low educational attainment and low aspirations and the lack of social solidarity.

Not only that circumstances did too. The Mark Duggan (pictured below) shooting. The arrest of a young woman on the first day of the riots. All of this contributed to the powder keg that erupted.

Did the riots change anything?

If it was to get one over the Police for the killing of Mark Duggan, yes they did. If it was to put an end to the numbers of deaths in police custody, no it didn’t succeed.

Did the jobless find work as a consequence? No.

Frankly, things are pretty much as they were for the groups of people rioting. Going back to the introduction to this review and the sense of an absence of real passion amongst rioters, if there had been a genuine, substantial reason for the riots, a real and serious cause to be fought then the riots could and should have had generated more constructive rather than destructive momentum. For instance, if it was genuinely to campaign against deaths in police custody/excessive use of police force and murders/stop and searches, then a more mature, lawful and sustained campaign was required and should have been  implemented.  Perhaps those with more experience of effecting campaigns for social justice should have come on board to try to create a  positive and beneficial outcome. If you think of Doreen Lawrence, the Kinsella family, Imran Khan, solicitor or  Michael Mansfield QC, these are the types of people with experience of effecting huge social changes in society. They or others with a  campaigning track record could have been enlisted to help effect positive change. However, as a lot of the rioting , in my view, was opportunistic, impulsive and not well thought out, such actions never ensued.

What we got instead was a lot of research, a number of reports, the most recent of which indicates that the government will be capping child benefits to a maximum of 2 children per family after 2015. A Centre of Social report , ‘Time to Wake Up: Tackling Gangs One year After the Riots’. stated that the numbers participating in gangs had increased, for though many gang leaders were rounded up and taken of the streets, the power vacuum this left was filled following internal gang battles to control these gangs and the streets.

I think poverty was a big factor. When people have little to lose, have little stake in society, they are more likely to take chances with their liberty.

Allied to this, as stated earlier, we do seem to have a more atomised society. It’s more “me,me,me” rather than “we, we we.” It may be that with the cost of living being so expensive and the promotion of successful individuals and celebrities such as David Beckham, Rihanna ,Usain Bolt and Jordan it’s more about success being equated to materialism and the cult of self as opposed to social solidarity and community. So much for, “we’re all in this together.”

After the riots: 10 Steps to Repairing Broken Britain

Should Children be heard as well as seen?

Should couples have a licence to parent?

Battle of Ideas – Further articles on the riots of 2011

3 Responses to One year on: What on earth did the riots change?