At last. Alter a year’s wait, George Michael is back. On tour in his home town London. On stage where he belongs.

After the well publicised postponement of his tour last October during a series of Royal Albert Hall gigs I’m sure I’m not the only one in the audience relieved the show was on. Especially as a month ago, September 2012, he announced the postponement of the Australian leg of the tour.

This created, for me at least, an unusual build up to the gig, with me regularly checking George Michael’s website and the internet to ensure he’s well and the show’s going ahead. 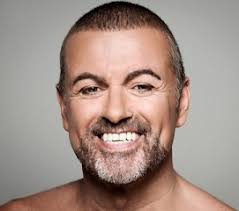 That’s quite ironic really, as exactly a year ago I had the opportunity to see one of his final shows pre-post-ponement due to pneumonia, as I just happened to be at the Battle of Ideas 2011 taking place at the Royal College of Arts literally right opposite Kensington’s Royal Albert Hall.

I popped in during a break and discovered a few tickets were available, but passed on it thinking I’d go later in the month. Little did I know of the drama that was soon to unfold.

Walking through South Kensington underground station after my event I heard a busker playing the most beautiful rendition of ‘Careless Whisper’. I could have kicked myself for missing the opportunity to have heard George Michael himself sing it himself just yards away.

Oh well, enough of the waffle and what might have been’s, you’re presumably reading this because you want to know what I thought of the show, so let’s get to it. 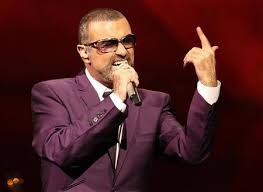 Two encores and the rapturous applause that greeted the start and finale to each song, demonstrated that although his fans have missed him, George didn’t miss a note all night.

We heard a curious mix of his own songs and many from other artists. The set list included Jesus to a child, Father figure, Star people, Song about America, Cowboys and Angels, Let her down easy, You have been loved, Wild is the wind – David Bowie, Brother can u spare a dime and Waiting for the day, Roxanne, New order, Rihanna – Russian roulette, Praying for time and Freedom.

Classic songs aplenty, but little in the way of upbeat songs. Nor was there was ‘Careless Whisper’ or ‘Last Christmas’ which was a real shame as both would have worked very well with the symphonica theme. 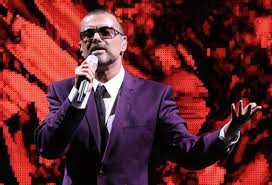 A particular highlight was his cover of Roxanne. Its amazing enough to be in the presence of a British legend singing on top form, but to have him cover this writer’s favourite artist Sting was almost too surreal for words. Two legends for the price of one.

His version was a somewhat more subdued version than Sting (pictured below) would have delivered, but nonetheless it possessed a soulful, passionate feel to it that brought the story behind the song to life. 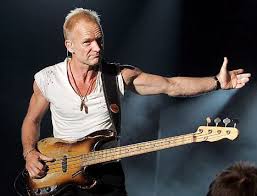 Sat near the back of the arena, George was barely visible to me on stage half the time. Though the large, stage video screen showed his face and various videos there were too few close up which was a shame and not really fair on the fans who’d all paid good money to SEE George Michael. In this day and age it really ought to be standard to have video screens all over the arena.

That said, once you’d got used to that, it wasn’t that big a deal as I sense the deliberate focus was on showing off George’s voice, songs and his symphony orchestra. Sometimes you’d just close your eyes and take it all in. That in itself, for the most part, was pleasure enough.

After just over two hours the show was over and with it the end of the 2011-12 tour. George seemed fit and well to me but the stated reason for curtailing the tour is to overcome the post traumatic shock of the pneumonia he suffered last year. It seems rather late in the day to be suffering this having been on tour for the past two months, but I wish George all the best and for him to return to touring in 2013 and recording new music in what will be a big year for George. His 50th.