The Masters of Comedy were in London for one night only. The only problem was that the masters of comedy on this night were not the headlining American Comedians Dick Gregory and Paul Mooney, but Londoner’s Curtis Walker and Mr Cee.

Dick Gregory and Paul Mooney should have been billed as past masters, for on this evidence you’d be hard pushed to say they were even GCSE grade.

I recognise that they are famed more in America for their social commentary, as opposed to being pure gag merchants. However when they are promoted to the public as masters of comedy and headliners of a major comedy show there’s a certain expectation that they will be funny.

Though aware of Dick Gregory, I had not seen either him or Paul Mooney before. 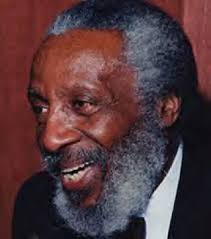 The main problem I had with Dick (that’s a sentence I never thought I’d have to write) was that, even with a change of micro-phone early on, he  was barely audible and when he was, he spent most of his time (60 minutes) ranting about the world, how Blacks are this, White people are that.  It’s a poor showing when you can barely hear the main act.

There was too much in his set based on tired, old racial stereotypes. For £35, to be hearing this from expensively brought in US imports didn’t impress me.

One interesting nugget he left us with was that African-Americans owe most White Americans an apology for blaming them for racism. His experience has taught him that the reality is that not all white people are racist, but more relevantly around 800 white people own the corporations or are in senior management positions in which they wielded the power and influence to implement the racist decisions and institutional structures that really harmed Black people’s economic prospects. I’m not convinced at all about his statistics but appreciated the point he was making.

When discussing the economic crisis he made further interesting comments regarding how people shouldn’t be relying on Oxford, Yale or Harvard Dons telling us how things are. Rather, citizens should be thinking for themselves.

His joke regarding praying to God for a job was funny. As he said, why ask for a mere job from the God who could give you anything, when what you really want is money? Just get straight to the point and pray for money! This got a great audience response.

He had the audience in hysterics after a round of applause broke out when he happened to mention he’d been married for 54 years: “Stop clapping. I didn’t say I was happy!”

Asked to explain the secret of his enduring marriage to his 75 year old wife he said it was down to two words. Fear and half. Fear that his wife Lillian will beat him if he even contemplates leaving her and take half (of everything) he owns in divorce!

He seemed quite obsessed with the Queen, making plenty of references to Her Majesty, Buckingham Palace, how it took its name from the Duke of Buckingham and other royal facts and observations.

The last 10-15m of his set was quite unintentionally funny. I could see he was being given his signal to wrap up, but he just ignored the signaller. 10m in the Signaller gives up and goes back stage. Or so I thought. All he did was scamper back stage and appear on the left side of the stage to re-start his signalling again. Dick sees him and goes, “I see you. I know. I know.” And carries on for a few more minutes. He’s in full flow and isn’t about to be silenced by anybody.

The signal man was tenacious, I’ll give him that. Why he had a little rucksack on all night I don’t know. It looked ridiculous. Maybe it was done for comical effect like the Court Jester in a Shakespeare play. In truth, it was a little bit un-professional on Dick’s part. Dick’s extended set on this occasion caused problems later on. Shows run to a timetable and it’s generally not on for an act to ignore the signal to get off stage for such a long time. Not only that, it’s one thing if you’ve got the audience in hysterics eager for more to finish the joke(s), but when that’s not the case it really is best to listen to the Producer’s cue and leave the stage.

That said he did leave the stage to a standing ovation, so maybe it was just me that was not impressed.

Paul was very, very political, in fact, stridently polemical in his delivery. I actually found his set a little uncomfortable, if not outright racist. He left the audience in no doubt that he hated white people. Or so it seemed.

His set was also full of references contrasting the differences between Black and white people. It was tiresome, stereotypical rubbish that offered nothing new in terms of comedy or humour.

Many Americans over use the Nigga word like it’s going out of fashion (I wish it was), but Mooney took its usage to a whole new level which was tedious and embarrassing. American’s ought to know that an educated British audience, particularly a majority Black one, doesn’t care too much to be hearing that vulgar, derogatory word. It’s not funny. It’s insulting.

The Black, British Comedians were on great form with very good sets from Mr Cee and Brixton’s own Curtis Walker.

Curtis seemed very happy to be doing a local gig he was able to walk to and regaled the audience with his tale of the “welcome home fat boy” greeting he received on a recent holiday in Jamaica. That went down a storm. His Olympic jokes went down well, especially the feats of the Paralympians that put those of us who are able-bodied, but lazy, to shame.

Mr Cee remarked how we never see legends on TV like the two here tonight, Dick Gregory and Paul Mooney, progressing to a killer joke re “The last time being in the 70’s was the stallion black beauty…”

He made a neat joke regarding media stereotypes when it comes to reporting news as ‘Black on Black crime’, ‘Muslims and terrorism’, yet it’s funny how no other crime is reported thus e.g. ‘paedophilia and catholicism’.”

He made a plea for more balance and recognition that there’s a lot more Black and Black love out there than the media would have us believe. That was a nice, positive message to leave the audience with.

There were a number of excellent spoken word poets on the line up – Akala, Anthony Anaxagorou, Suli Breaks and Floetic Lara but my sense is that the mix of comedy and spoken word poetry didn’t really work and unfortunately that was made clear to Floetic Lara in no uncertain terms when a vocal section of the audience tried to boo her off the stage during the second half. Bravely she stood her ground, rebuked the boo boys and girls and carried on. She endured further boos. The problem was not so much the poetry, which was fine, but it was too long, romantic and not in keeping with the flow of a big comedy show and crucially she was the barrier to one of the main acts of the night, Paul Mooney, who the audience were keen to see. Time was also moving on. It was nearly 11pm. Instead of providing a near four hour show, it might have been better to reduce the time, limiting the night to the two main American stars, 1 poet and 1 singer at most.

In earlier poems Floetic Lara suffered by having her lyrics overpowered by an accompanying drum beat. It was superfluous and spoilt what she sought to achieve. When she just sang, the audience heard a beautiful, harmonious voice.

He delivered fast, indecipherable lyrics. It sounded good and he might have been saying something of note, but it was nigh on impossible to comprehend a word he was saying, so it was hard to appreciate his set. Very disappointing.

His RIP poem (Rewind it Please) poem was brilliant.

Leo Muhammad was a fine co-compere with Floetic Lara and kept things moving along nicely.

The show ended at 23.45pm. This was far too late and people were streaming out as Leo Muhammad closed the show. As co-compere, Leo didn’t deserve that indignity, but that’s unfortunately what is likely to happen when you have far too many acts on the bill and the main star over runs by 10-15 minutes. Worst still, many attendees, like this Blogger, missed their last train home. A near midnight finish, beyond the last train of the night for a comedy show is just not acceptable. Especially on a Sunday.

Mixing comedy and spoken word was a promising concept, which didn’t quite work and the promoters are to be praised for introducing a British audience to American comedy legends who sought to uplift and edutain, it’s just a shame they didn’t manage to pull it off.

All in all it was an OKAY night. It wasn’t good value for money, but there were some very good laughs, especially from the British comedians. Added to which, there was good quality, hard hitting poetry and music, but overall one was left with a feeling of great disappointment and being under-whelmed by the two American stars of the night.