The W. Kamau Bell Curve – Ending Racism in About An Hour

Kamau has been praised by Punchline Magazine as ‘one of America’s most adept racial commentators’ and by Robin Williams as ‘ferociously funny!’ His recent stand-up album was named one of the Top 10 Best Comedy Albums of 2010 by iTunes. His solo show has long sold out runs in San Francisco and was a critics’ pick at the New York Comedy Festival. Time Out New York gave him **** and offered that, ‘Bell finds comic gold – offering provocative insights into an ugly reality’. Text supplied by festival and/or promoter. 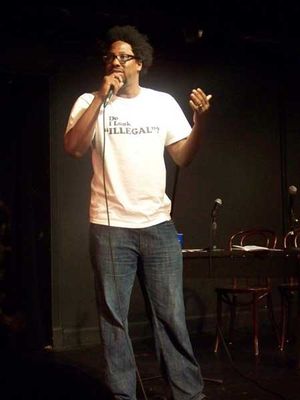 Excellent show from newcomer to Britain, W Kamau Bell exploring racism. Nice self-deprecating opening to the show when he shows a video of a show he did in 2005 saying that some guy with the name Senator Barack Obama had no chance of becoming President with a name like that! The video went down very well with the audience.

For attendees missing their annual dose of Reginald D Hunter go and see W Kamau Bell as he is very reminiscent of RDH with his accent (San Francisco), intelligent, thoughtful humour and laid back delivery. I liked the topical reference to the difference between British and American riots, linking the gag to the differences in our respective health care services.

Like Reginald he’s also rather too fond of using the N word, but fortunately he doesn’t over labour this just uses it as brief joke in itself more for “playful” comedic shock value than anything else.

Though I wish African-American, African-Caribbean British comedians would ease of doing so much race material and just concentrate on joking about other subjects, there was an appealing warmth to him as he humorously probed the differences  and similarities between American’s and the British, whilst simultaneously poking fun at both cultures.

The show contains lots of references to terminology, census definitions and how certain words we use have totally different meanings in the USA and could get you arrested. Very funny and welcome show from a newcomer to our shores. Will definitely be looking to see W Kamau again next time he’s in Britain.

Reviews of many more Edinburgh Fringe comedy shows 2011, 2010 and 2007, Scottish National Museums and art galleries, plus plays such as Murder and Mystery on the Menu, Othello and Spent can be read on this blog.