Show me the funny

Great title, shame about the lack of comedy

Having attended one of the regular ‘Comedy Untapped’ comedy nights run by Rudi Lickwood on 26th June, starring himself, Angela Reid, Dane Baptiste, Jason Patterson, Quincy and Curtis Walker, the audience  got a heads up on the brand new ITV show, ‘Show me the funny,’ of which, episodes 1 and 2 were aired on 18th and 25th July.

The show has a great title, reminding me of Stephen K Amos’s ‘Find the funny ‘ show and Tour of 2009, but that is the only similarity as the two shows could not be more different. Stephen KA’s focused on pure stand up, whereas this is a cross between X-Factor and The Apprentice and aims to test comedians in a variety of different settings, with a view to taking them out of their comfort zone and seeing who can find the funny, sorry, “show me the funny” in such situations. There’s a huge prize for the winner of £100,000, a DVD and national tour.

On first reading the line up this made little sense and it seemed extremely unfair of the show to be pitting relative newcomers such as Ellie Taylor, in comedy for 18 months, against seasoned, funny pro’s such as Patrick Monahan and Rudi Lickwood, with 10 and 20 years experience respectively. A bit like the X Factor putting novices up against the likes of seasoned stars such as Britney Spears and Tina Turner. I’ll leave you to work out which one’s Britney and which one’s Tina!

However after the second episode in particular, where despite basically headlining and “storming” a tough gig at Catterick army barracks, Rudi puzzlingly copped a barracking from the judges, none more so than that from Kate Copstick, Chief Comedy reviewer of The Scotsman, who reserved particular bile for him, calling him smug and lazy. I cannot agree with this description of his performance or her over the top choice of language.

Before I come to that, I think first of all one of the main faults of the show is it’s failure to show much in the way of substantial comedy. The shows focus on a few of the 10 contestants, one or two are almost treated as shoe in’s to the business end of the competition, in much the same way as Wimbledon TV highlights treat the top seeds like Roger Federer and Rafael Nadal as shoe in’s to the second week of the tournament. Thus they rarely show much in the way of highlight’s of their early round matches, arrogantly and wrongly in my view assuming the viewer doesn’t wish to see them play.

For those who know the talent of some of those performing this is annoying but maybe understandable, but must be pretty frustrating for the TV viewer unaware of the strengths or weaknesses of any contestant and just going on what they see.  The problem with this approach is that this is not a highlights episode, but the first screening of a show, so the viewer ought to see as much comedy as possible within the hour-long show. Critically as a consequence, the viewer is denied the opportunity to make comparisons by observing how performers have fared against one another in particular watching how the newcomers fared against seasoned comedians and gauging the all important audience responses. Having sat through the whole show, the warm up so to speak,  you look forward to the gig as finale, so that’s disappointing to only get snippets of each one and I think that needs looking at by the show’s producers. 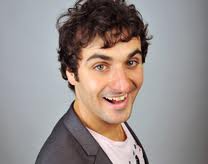 When you understand the competition rules, you can see that past work and experience won’t  automatically be a guarantee of success and that every participant is called upon to find the funny in whatever circumstance they’re in, Liverpool one week, Catterick army barracks the next, a school in a future episode. Not only that, but they are not meant to draw on “stock gags, banker gags”. In that sense, you can have a level playing field, although the ability to be able to “show me the funny” in any situation is still one you’d expect experienced performers to be more familiar at doing than newer comedians.

What’s been especially refreshing so far are the performances of Ellie Taylor. She’s stormed the first two shows with lovely 5 minute performances. Episode one to a hall full of Scouse women, which she played terrifically and delivered a set only she, and the one other female, Tiffany Stephenson, could possibly have delivered. It played to her strengths as a woman and was tailored to the audience, without patronising them. Great. With the army gig, she again showed she’d done her homework, got the lay of the land and dived in with some good gags regarding rank and divisions. That could equally have backfired on her as a pretty female in a venue full of boozed up soldiers, but she had them eating out of her hands.

Prince Abdi alas didn’t fare anything like as well. He’s semi-professional, though he’s recently given up his teaching job to go full-time into comedy, so he might well be regretting that after the stony faced audience reactions and roastings from the judges. The accents just have to go. He can’t do Scouse and he can’t do Scottish. He knows that, yet he still tried them.  Terrible decision and he didn’t learn from it, repeating the accents idea in episode two. As Kate Copstick said so beautifully bluntly, “a little bit of crap is too much in a 5 minute set.”

The audiences didn’t like it and found it patronising, insulting and worst of all alas just not funny. For that reason he had to go and having narrowly escaped the boot in the first episode, Prince Abdi was dethroned (sorry, couldn’t resist that) and fired in episode two. All you can do is listen and learn from such experiences. His confidence was gone, which is ever so vital for any perfomer. Let’s hope Prince Abdi isn’t too disheartened and is smart enough to come back stronger in the rest of his career.

Going back to Rudi, it is clear why the show can throw the new against the seasoned performer. Those judges aren’t wet behind the ears, they’ll be aware of Rudi and Patrick and for that reason will be judging them more harshly when it comes to the business end of the shows. The Judges won’t allow them to get away with using stock gags and routines they’ve seen before. The show’s about finding funny people who can deliver new material, tailored to a diverse range of audiences.

I would still expect to see show favourites Rudi Lickwood and Patrick Monahan to rise to the challenge and appear in the final shows, but with the show keen to take people out of their comfort zones you just don’t know.  For that reason and in recognition that this isn’t a pure stand up show, but a behind the scenes look at the writing process, the adrenaline rush and nervous tension that goes into walking onto stage, this show is quite interesting and I’m curious to see how it pans out and who ends up victorious.

The next show is on every Monday, 9pm ITV, repeated on ITV i-player with full 5 minute performances from all performers from each episode.

The final is being held on 25th August at the prestigious Hammersmith Appollo, London.

9 Responses to Show me the funny