There are some racy, near the nuckle jokes  in Act II of Bruce Norris’s fascinating play that examines racial tensions in America, circa 1959 and 2009. Sorry, they’re far too spicy for me to publish here I’m afraid.

These razor sharp jokes brought vividly to life the bubbling racism, which was direct and in your face during Act I, but kept deliberately brewing under the surface during Act II of Clybourne Park at the Wyndham’s theatre.

I found the play by turns hilarious, shocking and tension filled as it dissected racial tensions surrounding the sale of Russ and Bev’s home in white, middle class suburbia to a black couple. Underpinning this major event is the even bigger, more personal crisis the couple are going through. The emotional difficulty in coping with the anguish of their soldier son’s death. This issue whilst not the main story, is nonetheless a key component of the story.

The play was set in Chicago, but considering the familiar issues explored, it could just as easily have been London or elsewhere in England. 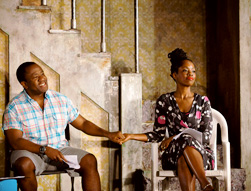 In the second half the racial issues remain, but the significant difference is that is set 50 years ahead, in 2009 and in a predominantly black area. Now, a middle class black couple are in a position of power and are considering the application from a white couple looking to move into their neighbourhood. The same cast return adopting different roles, subtly skirting around racial issues until they can no longer keep up the facade and gradually their underlying racial and sexist tensions come out via the guise of telling ever more racist, sexist and crude jokes. These are directed at stereotypes of black men and culminate in a jaw dropping joke that literally brings the action to a standstill and for the audience, results in a massive sharp intake of breath at the gobsmackingly blunt punch line. I imagine a certain Frankie Boyle would have been absolutely delighted if he had penned that joke himself.

It was ironic, that for a play examining racial tensions, there was a near total absence of non-white theatre goers in the audience. There can not have been more than 20 black people (less than 3% of the 750 capacity Wyndham Theatre) in attendance on my night, 22nd April (my birthday thanks for asking). Whilst this is nothing unusual for a regular West End play, considering the subject matter that’s quite surprising and a little disappointing. I would have to say this was deliberate on the part of the Playwright and Theatre and can be explained by two key factors. Firstly, the £40-50 average ticket price for seats in the stalls (significantly above the £35 average ticket price@ 2009 according to the Society of London Theatres) put the play financially out of reach for many and secondly, the total absence of marketing of the play to black audiences through black media and other relevant avenues, didn’t help matters.

Whilst it’s an excellent, intelligent play and extremely well acted, for all its award winning accolades and reviews, I didn’t find it quite lived up to the hype. For a start, the shrill, loud, put on, Southern American accent of Bev (ex- bunny boiler Stella from Eastenders) was irritating in the extreme and something that could have been toned down without weakening the effectiveness of her character in anyway. The opening of both the First and Second Act’s were also slow to get going, but once they sprung to life, they did so in no uncertain terms, with all the excitement , tension and anticipation of watching a group of middle-distance runners suddenly step up the pace as they jostle for best position, with the finishing line ahead. A fine play from Bruce Norris that people will be talking about for some considerable time.

Clybourne Park ran from 28th January to 7th May 2011 at the Wyndham Theatre, Leicester Square, London.